Under normal circumstances, we hardly notice its presence. Its absence, however, is painfully apparent. 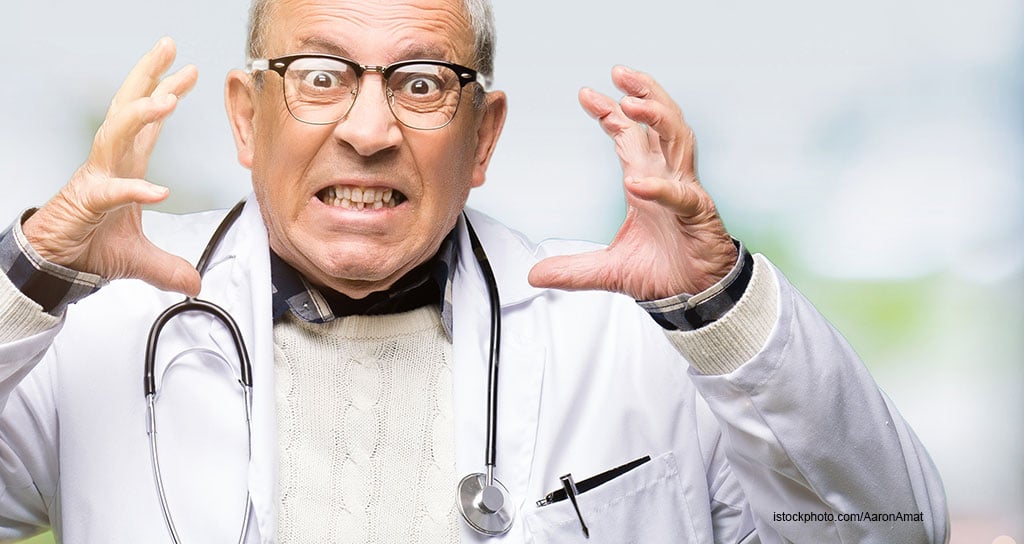 Effective leaders build a culture of professionalism by shifting the focus beyond the value (why) to what it looks like in action.

I heard a story that might appall you. A man nervous about the anesthesia that would accompany his colonoscopy used his cellphone to record the doctor’s instructions. This way, he could revisit them afterward, knowing his anxiety might make him forgetful. Flustered, he forgot to stop the recording, which continued throughout the entire procedure.

Later, when he realized what he had done, he listened to every word the medical team shared during the colonoscopy. To his horror, he discovered that while he slept, his caretakers mocked and derided him. Apparently annoyed by his nervous questioning, they lambasted him, unaware they were being recorded unintentionally. At one point, the anesthesiologist said directly to the sleeping patient, “After five minutes of talking to you in pre-op, I wanted to punch you in the face and man you up a little.”

That was one of the more innocuous comments.

We can agree that professionalism was absent that day in the medical suite. Clearly, any doctor acting like that should be fired. But what if the recording hadn’t happened? If the conversation had remained private between a few annoyed practitioners, would the situation be just as unprofessional? Would they be fired?

Or what if the discussion had been recorded and instead of the awful things uttered, the doctor was caught saying: “Man, this guy is a tough case. He was so nervous and had so many questions. I mean, I get it; he’s worried. But it was exhausting talking to him. I’m glad he’s asleep now.”

Exasperated, a veterinary manager blurts to her colleagues, “My client care team is so unprofessional.” She goes on to describe an exchange she heard between a receptionist and a potential client. The pet owner called to ask about the hospital’s capacity to care for a particular dog breed. The receptionist responded, “Yes, ma’am, our doctors are able to tend to the needs of that breed.”

The manager was frustrated by the terse response. No call to action to schedule an appointment? No further questions about the dog, its age and background, and the client’s concerns?

“This is the level of professionalism my team has,” the manager said with a tinge of disgust. “I think I’ll just have to handle all these client communications myself.”

You might nod in agreement and recall similar experiences involving your team.

In my consulting work, I routinely talk to practice leaders about culture and team performance. Professionalism comes up as one of their more common concerns surrounding client conversations. Many veterinary leaders seem to vigilantly seek an elevated display of professionalism in their teams. In their view, professionalism is an attitude by and large missing in veterinary practice.

You might agree. If so, I want you to try something.

First, jot down your definition of professionalism. What does professionalism mean to you in your hospital? Now, fold the paper in half and put it in your pocket.

Next, gather your team, perhaps at an all-staff meeting, at a department meeting or when pulling aside your CSRs over lunch. Give everybody a sheet of paper and a pen. Tell them to write down — no chatting or peeking — how they define professionalism. Give them three minutes, and set a timer.

Finally, if the group is small, have everyone read what they wrote, one person at a time. If the group is large, randomly pick four or five people.

I’d like you to pay attention to three things:

My guess is you’ll hear similarities and several striking differences. In the absence of clearly defined and shared expectations, concepts like professionalism are wrought with subjective variability. What it means to me might vary significantly from what it means to you. Given its critical importance to so many of us, that’s problematic.

That said, the actual definition of professionalism is far less important than what it means to you and your team.

In her article “Professionalism in Medicine” — read it at bit.ly/3wDGFZf — Dr. Lynne Kirk succinctly sums up my point. She writes, “Generally it is difficult to observe and measure values.”

Values such as professionalism are oddities in that they are critical to our interactions and deeply subjective. Values are the standard by which we hold ourselves, and we extend those expectations to others. For example, I always want to give others grace and the benefit of the doubt. Perhaps someone’s display of bad behavior is simply the culmination of a horrible day.

Likewise, if I’m having a terrible day and the not-so-savory parts of who I am leak out, I hope others will give me the benefit of the doubt.

The problem is that things like grace and the benefit of the doubt are nebulous concepts. As such, I might offer someone my greatest form of grace while, at the same time, they perceive me as judgmental and rigid.

Conversely, in my moments of poor behavior, someone might believe they are offering me grace while, to me, it feels like judgment. What feels like the benefit of the doubt to one person might look like criticism to another. This is because the only way to express a value is with behavior. Our actions allow others to perceive our values, and that perception is subjective.

For example, respect is a value nearly all people believe in. Yet, to show respect in one part of the world, we might offer a firm handshake and direct eye contact, while in a different area, people might perceive those behaviors as aggressive and rude.

As Dr. Kirk goes on to say, “Behaviors are observable and measurable.”

The values we hold for the vision of our hospital culture help us create a beautiful work of art. Only, this painting is more impressionist than portrait. The colors are vibrant, but the strokes are thick and lack detail. We need an image that is clear to all, free from subjective interpretation.

To craft a culture in which people behave the way we expect of them, we need both the beauty of values and the clarity of behaviors. Put another way, values speak to the “why” and behaviors to the “what.”

Effective leaders build a culture of professionalism by shifting the focus beyond the value (why) to what it looks like in action. I think of these as KBIs, or key behavioral indicators.

Craft a Culture of Professionalism

Think of the subvalues most important to the kind of professionalism you want to see in your veterinary team. Keep the list brief — no more than four or five subvalues. Write them down.

Next, you’ll want to define key behavioral indicators for each subvalue. Think of these KBIs as observable actions someone could take that would clearly indicate they display the value you want to see. In our example, ask yourself:

Thinking of someone on your team who exemplifies a particular value can help. For example, which team member pops into your head when you think of reliability? Now, ask yourself, “What does this person actually do that makes me define them as reliable?” 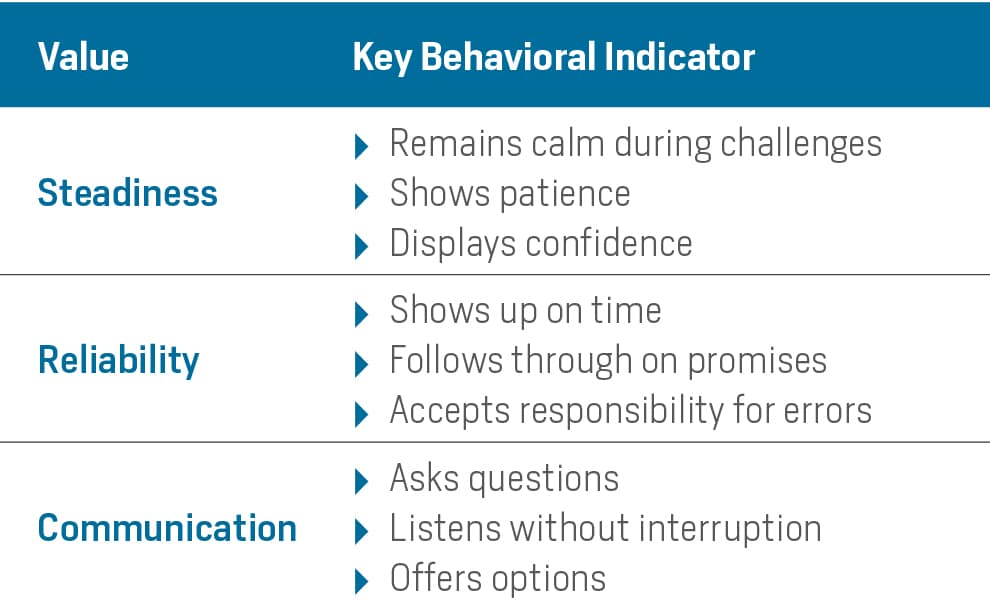 Create your own chart. Think about the subvalues that are important pillars in your subjective definition of professionalism. Then write a few key behavioral indicators for each subvalue.

Now, you’re creating a painting that is clear to everyone.

STEP 3: Include your team.

You pull out your canvas and begin painting. The base colors shine through, and the outlines of what to expect become clear. It’s time to include your team in filling in between the lines.

Set aside time for a team meeting. Explain that the purpose is for everyone to gain clarity on your expectations of professionalism. Introduce everyone to your professionalism subvalues and your KBIs for each. Then, open a discussion. For example, you might ask:

The goal here is twofold:

At the end of the meeting, you and your team should agree on a list of KBIs. Now, go live them!

First and foremost, as the leader, you need to model the behaviors. I encourage you to empower the team to help you do that by pointing out when you do well and gently calling you out when you fall short.

You also can use your KBIs as a coaching tool.

Think back to the manager mentioned earlier, the one whose CSR was abrupt with the client inquiring about the hospital’s ability to see a special-breed dog. If you’re armed only with the fuzzy, highly subjective value of professionalism, coaching the CSR is more difficult. “I need you to be more professional,” is all you might say. “That conversation was not professional.”

You, however, have the powerful tool of mutually agreed-upon KBIs. So your conversation might sound more like this:

Which manager is more successful in crafting a culture of high-performing, engaged professionals?

You are. Of course, you are.

Josh Vaisman is the co-founder of Flourish Veterinary Consulting, where he is a positive psychology practitioner and a positive leadership and culture consultant. He combines more than 20 years of veterinary experience and a master’s degree in applied positive psychology and coaching psychology to empower veterinary organizations in cultivating environments where employees thrive. He is a certified compassion fatigue professional.