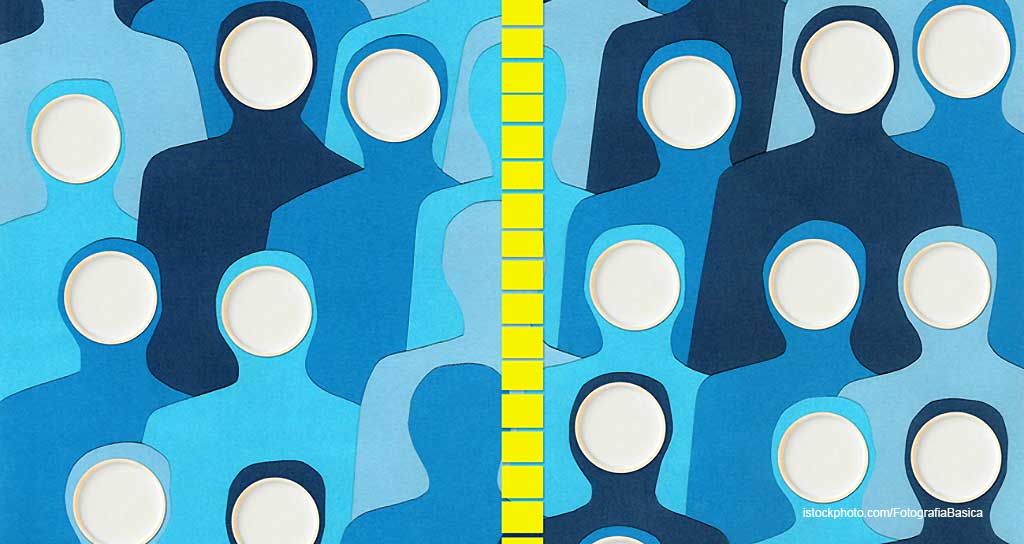 I’m sure we can agree that the last decade in the United States has been politically polarizing. Despite constant calls for unity, we have seen increased sociopolitical unrest, broken friendships, shattered familial relationships and much, much more.

The data bears this out. Ahead of the November presidential election, Pew Research Center studies found that 90% of supporters of the major political candidates thought the opposing candidate would do lasting harm to the country if elected. Wide disagreements were found related to the COVID-19 response, access to health care, the economy and numerous other topics. In short, there are pitifully few moderates bridging the political parties.

With so many disagreements and so few folks identifying as politically moderate, it is easy to limit exposure to opposing views. Admittedly, I have pruned some of my social media accounts over the past decade such that they are populated by like-minded people. Yes, I have an echo chamber. Echo chambers are popular because people generally avoid confrontation and want to create spaces in which the risk for conflict is reduced. It is understandable behavior, even if it brings new challenges and sometimes even the proverbial rabbit holes.

In work settings, we commit to avoiding as much conflict as possible. We want our staff members to be respectful of one another and work well together, and we want our clients to be happy with our services, so much so that they tell a friend.

A commitment to diversity often necessitates an embrace of conflict. When we embrace diversity, we must embrace learning new skills that will help us understand one another, help us communicate better and help us bridge gaps across the things that make us different. Politics, especially in recent years, is something that can make us feel and seem different, depending on the setting.

Culturally, many Americans embrace the adage that you should not talk religion or politics in mixed company (folks you do not know). These two areas of our identity are often off-limits in polite conversation because they can be naturally conflictual. For many individuals with marginalized identities, the refusal to talk about politics can be difficult because of the need and desire to advocate for sociopolitical remedies to their marginalization.

The current tone and tenor of public discourse suggests that perhaps many more people now eschew advice to resist discussing politics in public spaces. To this point, I asked #VetTwitter how employers were dealing with political diversity. I received a range of answers. Several respondents shared that their workplaces were essentially echo chambers, meaning everyone who works at the clinic shares a similar political viewpoint. Those respondents suggested that they talk about politics a lot at work. Other respondents intentionally refrained from talking about politics at work, and still others expressed disappointment and frustration about the refusal or failure to acknowledge how political discourse has affected daily life. So, what does all of this mean for your worksite? It means we need to create a bit of space for political identities. Now, of course, this does mean that anything goes in terms of political speech, but it does show the need for a consistent commitment to practicing respect in the workplace.

Here are three concrete activities that employers can do to create inclusive environments for political diversity.

Much has been made over the past few years about the right to free speech, but what is increasingly clear is the need for better education about free speech, especially in the workplace. The truth is that the right to free speech is specific to government activity that might hinder speech. Constitutionalists recognize that private companies and entities can and do legally limit speech. Further, speech that is considered obscene, defamatory, fraudulent, inciting, threatening or otherwise criminal has specific limitations.

Everyone might be free to say what they want, but everyone also must be prepared to accept the consequences of speech that crosses legal boundaries. Providing training and educational materials about the limitations on speech should be a part of the onboarding process and regular professional development training.

2. Articulate What Your Clinic Defines as Political Speech

Does your veterinary practice observe Pride Month? Do you have Black Lives Matter signage? How about a Gadsden flag or a candidate endorsement in the window? Some individuals might interpret various signs and symbols as political, whereas others might not.

Practice leaders must clearly define the parameters of speech in the workplace. This is good practice for your employees, but it also provides important signaling for current and potential clients. While you might want to establish limits specifically around language concerning specific political parties, candidates and campaigns, consider facilitating team discussions about other kinds of signs and symbols that might be allowed in the workplace. While you might want to display a rainbow flag to signal a welcoming space for queer clientele, the team might decide to have a standardized dress code that eschews pins or shirts bearing specific messaging. Define what is acceptable speech that would maintain a positive and engaging workplace culture.

Practice leaders might be inclined to dictate what is political speech, but engaging employees in the development or refinement of policies and practices increases buy-in, the feelings of being seen, heard and respected, and adherence to policies.

Everyone you know likely has a strong political opinion about something, but your veterinary practice might not be the appropriate place to share that opinion. During training and counseling, be clear with employees about when language might be considered harassment or violate anti-discrimination laws. Keep politics out of official communications, whether with employees, clients or on social media channels.

No one wants to be in spaces where our identities or political ideologies are unwelcome. The continued extreme polarization in the United States and elsewhere makes it difficult to have meaningfully empathetic conversations about how we individually see the world.

The data is clear that the deep political chasm has resulted in countless broken personal and professional relationships. Commit to making your veterinary practice one of the few spaces where employees have a clear sense of what is acceptable language and behavior. Defining political speech and the limitations around it puts everyone on the same page and creates space for expression and, hopefully, rich conversations.