The anatomy of privilege

If we are not mindful and deliberate, privilege and rankism can result in toxic work environments. 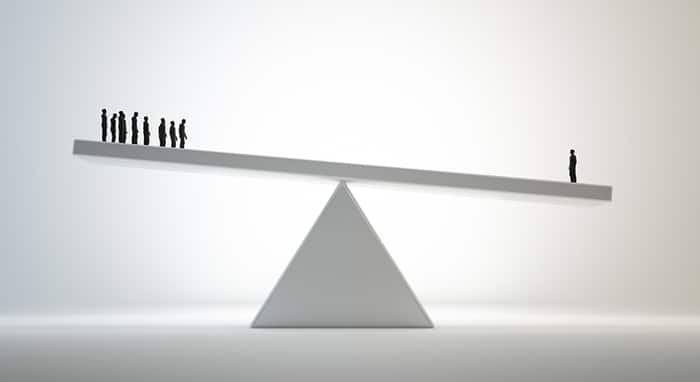 When it comes to understanding privilege, thinking about privilege at the macro level is critical.

The term “privilege” has become one of the hottest buzz words in the diversity and inclusion lexicon. The word is often considered provocative in discussions due to a fairly abstract notion of who has it and why.

I’d like to break down the concept of privilege and how it might be seen in and around the veterinary profession.

The Merriam-Webster dictionary defines privilege as a noun — “a right or immunity granted as a peculiar benefit, advantage or favor.” Privileges may be something we are simply born into by chance or something earned through some kind of achievement. You may have heard or even used the phrase “the privileged class” to refer to those having generational wealth.

This definition is related to the sociological phenomenon often talked about in identity discussions, but that type of privilege has a bit of a twist. Privilege is about unseen institutionalized behaviors that either benefit or disadvantage groups of people according to identity. In a nutshell, privilege is about the somebodies and the nobodies in a system or society. Somebodies have privileges in this system because they might be members of the numerically dominant racial or ethnic group, the numerically dominant gender, the geographic location, the dominant religion and so on. Nobodies exist outside of the dominant groups.

To be clear, most of the personal attributes that are seen as privileged are simply the luck of the draw; they are attributes that we do not choose but are born into. This does not mean that people do not work hard or that the privileges are easily visible at the micro level. Other attributes may be influenced by factors such as our family’s customs and traditions or where we find work according to our skill set.

Privilege as a social construct is fluid. Often at the individual level, we find that we may be socially privileged in some ways and disadvantaged in others. Again, this kind of privilege operates at a systems level, as such privilege in diversity conversations has nothing to do with working or studying hard. It has to do with all the things in the background that make working or studying hard pay off more for some and not others.

In my work with veterinary students, this is the time I usually experience a bit of pushback about acknowledging systemic privilege. I hear, “But I’m not privileged. I have worked hard for everything I have and everything I’ve accomplished!”

When it comes to understanding privilege, thinking about privilege at the macro level is critical. Viewing veterinary school preparation from a broader perspective, we are forced to acknowledge the wide disparity of quality in K-12 education that affects a prospective student’s choice in rigorous undergraduate universities and how that in turn may shape their path to admittance. We also can consider how little choice prospective students have in their initial state of residence, whether they are in a state with a college of veterinary medicine or must consider relocating to establish residency for cost reasons. The origin of the dilemma is triggered by chance of birth or parental choice.

During our conflicted discussions about privilege and who has it, I encourage students to explore the concept of rankism. Rankism is a term coined by Dr. Robert Fuller, former president of Oberlin College. Fuller describes rankism as how individuals do not see personal privilege but how we all inadvertently abuse privilege in asserting some kind of superiority over others. Fuller distills this concept into the Somebodies with privilege and the Nobodies who are at risk for privilege abuse. In fact, rankism is considered the mother of all -isms because of the way identity privilege shapes how people interact without regard for individual dignity. At its worst, rankism is seen in racism, sexism, homophobia and other belief systems that are reliant on an inherent belief about a dominant group’s supremacy.

Privilege in the Profession

Students often note that veterinary specialists and corporate practices are Somebodies, wielding significant privilege and power within the profession. They frequently note that some kinds of clients are Somebodies (those owning very valuable animals), while others are Nobodies (those with little resources to meet the standard of care desired for their animals). Invariably, students see themselves as Nobodies in the profession, with assumptions being made about their competence, confidence and what they hope to do with their veterinary degrees. Someone always asks whether having “just” a DVM will afford them enough privilege to be a Somebody in the profession at some point.

It is at this point that I explain privilege is not always permanent; based on a particular attribute or identity, individuals might find they have it while other times they might not. For example, prospective veterinary students already see students as Somebodies, and students become Somebodies when they become veterinarians. Similarly, there may be circumstances when members of a dominant social group can find themselves in unique systems where they are the minority and subject to privilege exercised by other groups through cultural, social or legal norms.

Your practice is a system, and folks within the system have varying degrees of privilege. This isn’t inherently a bad thing. Someone has to be in charge, right? Of course. However, if we are not mindful and deliberate, privilege and rankism can be abused in ways that, at the local level, can result in toxic work environments with rank problems such as, but not limited to, inequitable pay, unfair scheduling, and clients with animals with unmet needs. These are not productive environments. Somebody in your practice environment — whether employee or client — will feel like a Nobody.

Fuller argues that the only antidote to rankism is dignity, or every individual’s right to be worthy of being treated equally and well. This is easy enough, right? Sure! Ensuring that policies and practices are developed with dignity as a core value for all members of your team and all potential clients will help create a system that eschews the conflicts that follow the abuse of privilege and rankism. A commitment to dignity as a core value should guide personal interactions, which creates space for improved engagement, learning and understanding. This can only lead to better medicine and a better life for you, your clients and their animals.

We are all products of our environment. That shapes our worldview, including how we do business. Understanding how privilege operates in society, how it can be used and abused in rankism, and how to disrupt our systemic privilege issues will improve your practice and your outlook on life.

To learn more about privilege and rankism, be sure to visit Fuller’s website: www.breakingranks.net.