Workplace gossip can be harmful, so know how to control it. 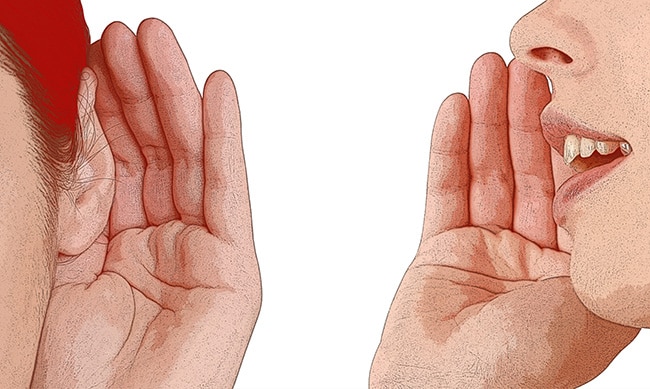 “Maria’s skirt is awfully short, isn’t it? And she sure doesn’t have the figure to pull that off!”

“You’re not going to believe what I heard about our new client.”

“Did you hear who is getting divorced? You’re not going to believe what happened!”

“We’re not getting bonuses this year because of what happened between Fred and Susan.”

“Did you hear why Martin got that raise? And did you hear how much it was?”

Statements like these are heard in workplaces everywhere, including at veterinary offices. The victims of gossip are managers, co-workers, clients and anyone else the gossiper runs across during his or her day. While gossip can contain kernels of truth, stories shared are often blown out of proportion or are sometimes completely false.

When team members gossip and the manager doesn’t effectively address the situation, the workplace quickly becomes toxic. Some managers don’t address gossip because they turn a blind eye (or, more accurately, ear!) to what employees are doing. And unfortunately, sometimes the managers are active gossipers, too, which makes the situation worse.

So, how should workplace gossip be handled?

Trying to pinpoint why gossip goes on in your workplace can be helpful.

So, what can you do? Once someone regularly engages in gossip, correcting the behavior can be challenging, but it can sometimes be addressed by helping the employee receive attention in positive and productive ways.

Like with any other human resources issue, employee manuals should contain policies that address gossip, including what is prohibited and the consequences if someone acts in an inappropriate way. The policies should be highlighted during meetings in which the manual is discussed.

Know the law when writing gossip policies. For example, forbidding employees from discussing salaries might be tempting, but such a policy isn’t legal.

It’s also important to differentiate between harmful gossip and normal workplace discussions. For example, someone might say: “Did you hear Sara’s cat had six kittens last night? The cat is such a beautiful calico, so I’ll bet the kittens are cute.” Technically speaking, you could call this gossip, which can be defined as “casual or unconstrained conversation or reports about other people, typically involving details that are not confirmed as being true.”

The employee is talking about Sara in a casual way, providing details that may not be true. There might have been five kittens — or seven — and maybe none are calico. Or maybe the cat didn’t have her kittens yet. Should that conversation be prohibited by policy?

Define what you mean by gossip. You might, for example, determine that when conversations about others are disruptive, or have the potential to hurt feelings or damage relationships, that’s gossip. If it drains employees’ morale, it’s gossip.

After a long day, you might be tempted as a veterinarian or practice manager to make an off-the-cuff remark about a difficult client. But beware. To help ensure that employees don’t gossip, watch what you say. When an employee makes a comment that can be construed as gossip, explain how the comment could be shared in a non-gossipy way or why it wasn’t appropriate. When an employee occasionally makes comments that cross into gossip, behavior modeling and employee coaching generally work. Call yourself out as well when you slip into behaviors along the gossip spectrum.

If an employee is a hard-core gossiper, you will need to follow your progressive disciplinary procedure, a process that most likely starts with a verbal warning and ends with termination. Meet individually with the perpetrator in a confidential location and discuss the impact his gossiping is having on other individuals and the practice. Review with each perpetrator the disciplinary procedures that will be followed and then stick to them, even if an employee who resists improving his behavior has to be fired.

Make sure to first meet individually with a gossiper rather than go immediately into a team meeting or send an email blast. Here’s why: You might remember being a child in a classroom where the teacher vented about the high absenteeism rate — ranting, of course, to the students who did show up in class. Sending a group email or holding a team meeting without individual counseling and discipline is the grown-up version of the teacher chastising good-attendance students for absenteeism.

When you do meet with the entire team, discuss the topic of gossip on a broad level. Invite the team to brainstorm solutions to help ensure that workplace culture is as positive and gossip-free as possible. This can include rewarding employees when they share positive news with one another, perhaps giving kudos to a fellow employee who received an important certification or handled a difficult customer especially well. (Make sure that kudos aren’t a disguise for gossiping about the challenging customer.)

Finally, you need to protect employees who share with managers any instances of gossip. Ironically, you also need to ensure that gossip reporting doesn’t become an insidious form of gossip. Remain firm and consistent in your efforts to root out gossip.

The process can be challenging, especially if gossip behaviors have been entrenched in the workplace culture, but the rewards are significant and worthwhile.