The Upside of Letting Go

Trust yourself to adjust your career goals. 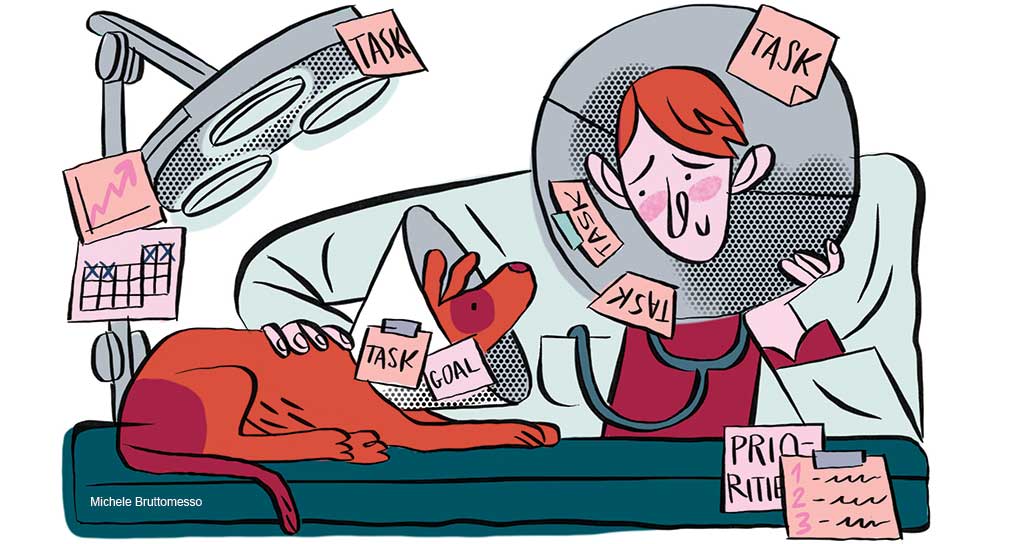 Our profession is seeing an epidemic of self-inflicted anxiety and regret. Plans we made when we were younger have turned out swimmingly — at least on paper — yet so many among us are unhappy and anxious about the future. How is it possible? How could a profession full of A-plus students and high achievers be so full of people who feel miserable or afraid? And what’s the plan to fix the situation?

No one loves planning as much as I do. I have taught courses all over the world on setting priorities. I have asked veterinary professionals to write goals on postcards that I later mail back. I have paired up people as accountabili-buddies. I have even taped reminders of my plans (“Stay off social media today!”) to my bathroom mirror. It’s fair to say that I’m really into planning.

But I have to tell you, I’m starting to think we might be taking our plans too seriously.

Goals are powerful tools. They give us a clear path to follow so that we don’t feel like we’re wandering lost in the wilderness of life. They give us a feeling of control. They give us a scoreboard and a game clock — “If my practice revenue is up 20% over last year, I will know I have succeeded and that I am ‘winning.’ ” Without goals and plans, no one would have any sense of a finish line.

Structure, control and metrics are comforting gifts to have in our lives until they are not. There’s a tipping point between helpful and harmful when it comes to goal setting. To find the tipping point (and steer clear of it), three significant and common problems are helpful to acknowledge.

My wife teaches introductory and advanced science courses at a top-tier liberal arts college. One of her greatest frustrations is counseling students who set their sights years ago on one day applying to medical school (or veterinary school or dental school …) and who refuse to recognize that they might have outgrown the goal. Perhaps they neither enjoy science anymore nor excel at it. These students might have discovered other subjects they love, but they reject the idea that they might be happier and more successful abandoning the career plan they made as teenagers and seeking a path truer to their skills and interests.

Unfortunately, those who cling dogmatically to an old plan, even as the world and their understanding of themselves change, often end up deeply unhappy. They put huge investments of time, energy and money into a career that doesn’t bring satisfaction, all because they couldn’t discard an outdated goal. This is an example of what I call the railroad problem.

You’ve surely heard this proverb: “Better the devil you know than the devil you don’t.” Taking this philosophy too much to heart is like buying a train ticket to a place you know but don’t like. The longer you ride that train on its rails — or the more years you put into that career — the harder it becomes to imagine stopping the train to investigate other destinations. It isn’t impossible to change trains, but if you value certainty above all else, venturing into the unknown can seem scary.

When I was in veterinary school, I fell in love with the idea of being a practice owner. I kept two enormous three-ring binders full of ideas, photos, magazine clippings and business cards I had collected in hope that they would one day help me buy or start the greatest practice in the history of veterinary medicine. I debated the ideal number of locations, square feet and doctors. I signed up for every email list that promoted veterinary clinics for sale.

Meanwhile, my wife’s career required us to stay fairly mobile for several years until she could acquire a tenure-track job that she enjoyed enough for our family to put down roots. While she paid her academic dues and we moved around, I practiced as an associate veterinarian and waited until the time was right to pounce on my ownership goal. Along the way I got the chance to write articles and speak on veterinary topics I cared about. Later, I was hired to consult on projects and I picked up steady work at one of the major veterinary media publishers. To balance it all, I cut my hours at the clinic to about three days a week and worked from home on my own schedule the rest of the time. I worked that way for years.

When my wife found an amazing job with long-term potential, I decided the time for ownership had come. On a Wednesday at about 3:30 p.m., I was floating around our backyard pool when I delivered the news. “Honey,” I said, “I think it’s time for me to start that vet practice I’ve been talking about.” She replied, “You’re out of your mind.” Taken aback, I paddled over to the pool’s edge and asked her to clarify.

“Do you know why people start veterinary practices?” I asked, shrugging.

“So that one day,” she said, “if they are extremely lucky, they will be able to float around in their swimming pool at 3:30 on a Wednesday.”

As the saying goes, life is what happens while you are busy making other plans. It might look foolish in retrospect, but for all those years, I had assumed I’d get back to my original plan — to own a practice — but I had ignored the fact that a whole other plan had unfolded in the meantime. I had already found a great, fulfilling career. I just had to look around and realize it.

I often see this opportunity blindness in veterinarians who decide early in their careers exactly what success should look like and then commit themselves to that specific scenario. When chances come along that look different from the scenario, these veterinarians look past them. Don’t let a case of tunnel vision for a goal set years ago blind you to amazing and unexpected opportunities.

I know a practice manager named Shawna who is so focused that she unironically decorates her workspace with motivational posters. (Picture Michael Jordan: “You miss 100% of the shots you don’t take.”)

When I met Shawna, she had been tasked with increasing her practice’s profitability by the end of the year. It was late October, and by God, she was going to do it.

One day, a competent, qualified certified veterinary technician who had moved to the area walked into Shawna’s clinic and asked about job openings. The CVT had excellent credentials and references, he fit the practice culture, and he could start immediately.

Shawna was torn. Hiring the technician would reduce team stress, increase case capacity and potentially raise the practice’s standard of care. But none of that would show up on the end-of-year financial reports. Shawna wouldn’t make her December target.

If you’re reading this with clenched fists and thinking, “Send me that technician,” you’re not alone. Hiring great talent, especially during a shortage of doctors and technicians, seems like an easy decision. Shawna, however, struggled because the decision could put her at odds with a goal she felt would define her success as a manager.

Creating goal-oriented deadlines can generate useful urgency and motivation. But when goals and deadlines are treated as inflexible absolutes, they can lead people to behave in ways that don’t make sense.

If Shawna was going to manage the practice for just one year and her only goal was to walk away from the job with a gold star on her resume, then placing every other consideration second to a rigid end-of-year profit deadline would make sense. But in reality, Shawna would hopefully be managing this practice for five, 10 or even 20 years. She had to check her instincts and remember that her larger goal was holistic, long-term success for the clinic, not the short-term goal she had arbitrarily tied to an end-of-year deadline.

Big-picture thinking works just as well for firing as for hiring, by the way. If you dismiss a skilled but toxic colleague, you might not make your revenue growth this year. But you might improve morale, make space for someone who is a better fit, and ultimately look back and believe it was the best decision you ever made. We see it all the time in this business:

Sometimes an inability to adjust the timing of our goals turns short-term wins into long-term losses.

Look, I’m not knocking goals. I love goals. I’m not criticizing anyone who keeps an intricate, detailed, measurable to-do list. Knock yourself out making that vision board. It’s important to know what we are doing now and what we intend to do next.

Make plans but hold onto them loosely. Check in with them often. Take comfort in knowing generally where you’re headed in life, what your personal values are and what makes you happy. And then accept with an open mind that people and plans evolve. None of us are clairvoyant. None of us can control everything. Goals and plans are not binding oaths, and there is no shame in changing direction. In fact, there can be great joy in it.

Life is a journey we make only once. We must not be afraid to change trains.