Rather than sell his practice to the highest bidder, an Arizona veterinarian made his employees the owners.

Randy Spencer, DVM, is the hospital director at 1st Pet Veterinary Centers, which he owned before the establishment of the employee stock ownership plan. The Colorado State University graduate has special interests in internal medicine, dentistry, soft tissue surgery, ultrasound and practice management. 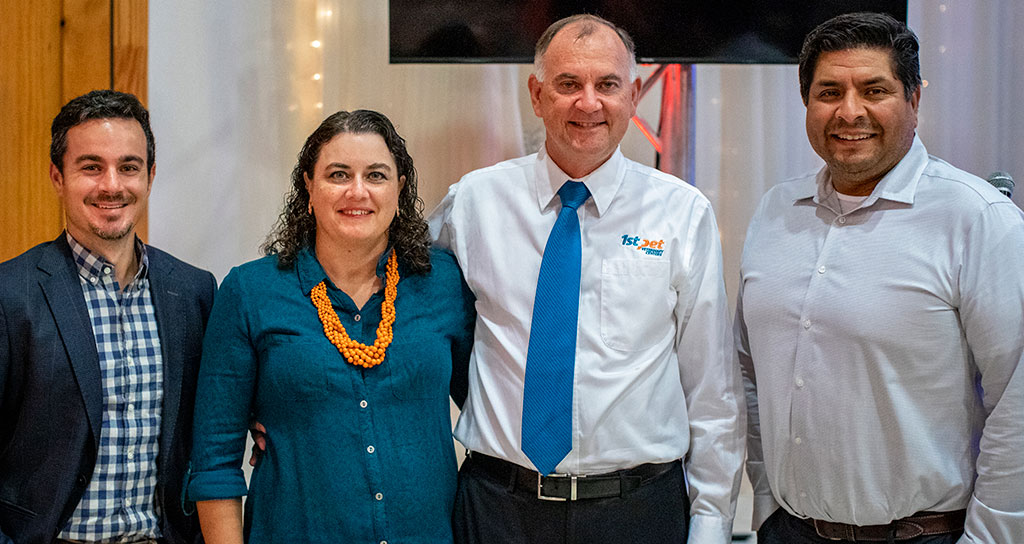 Helping oversee the move to an ESOP were, from left, Tom DeSimone of Prairie Capital Advisors, Cheryl Spencer and her husband, Dr. Randy Spencer, and ESOP trustee Miguel Paredes.

According to one estimate, more than 14 million U.S. workers participate in an ESOP, or employee stock ownership plan. In August 2021, that number increased by 300 when my 24-hour emergency, specialty and primary care clinics, 1st Pet Veterinary Centers, implemented an ESOP. As far as I know, we are one of the very few veterinary practices to have an up-and-running ESOP. As a result, our employees are now the business owners, and at no cost to them.

I chose an ESOP over selling my Phoenix-area clinics for several reasons. One was legacy. We created a great hospital culture and didn’t want to lose it to a corporation. Another reason was to reward the people who helped build the practice over many years. I wanted to provide an excellent retirement opportunity to all long-term employees, now and in the future, regardless of their position — from the top-producing veterinary specialist to everyone in maintenance.

At the same time, I, the seller, got a fair market price for my company’s value, and 1st Pet received significant tax benefits, which can be used to pay off the seller note and finance future growth.

S corporation ESOPs are the most tax-advantaged companies in the United States. Whatever percentage the S-corp has sold to an ESOP is the percentage of taxes the company does not pay federally and in most states. As a result, 1st Pet Veterinary Centers Inc. will pay no federal or state taxes going forward.

I love veterinary medicine and all the wonderful people who work so hard to serve our patients and clients. But I want other hospital owners to know that they can do more than sell to a corporation. An ESOP, I believe, allows us to maintain the heart of veterinary medicine — that is, people caring for pets.Looking back, I wasn’t worried about my veterinarians’ retirement savings because they generally amass enough. But for my veterinary technicians, client service representatives and maintenance personnel, their 401(k) plan wasn’t enough. The ESOP will provide a good retirement to all who stay for a significant period. For me, at age 62, the ESOP means I will remain a part of 1st Pet and lead it for as long as I want, probably for at least the next seven to 10 years.

Getting to this point was a three-year undertaking. The laws governing an ESOP are complex, so working with experienced professionals is vital. I engaged The Great Game of Business, a coaching organization, to help with the transition. I hired Prairie Capital Advisors Inc. as well as an attorney and a trustee to lead the transaction. I found a third-party administrator to oversee the ESOP indefinitely. All that took a lot of time, probably hundreds of hours on my part.

Some risks are inherent in ESOPs because they don’t always work. One dramatic failure involved United Airlines, whose 1995 ESOP was beset a few years later by squabbling among unions and other vested interests. Also, problems can arise if the ESOP isn’t set up strategically. So after speaking with companies that instituted an ESOP, my advisers and I decided to establish an ownership culture before doing anything else. More on that critical move below. Dr. Randy Spencer speaks at a Great Game of Business huddle, a crucial part of 1st Pet Veterinary Centers’ transition to an ESOP.

I didn’t start with three hospitals. After graduating from Colorado State University’s veterinary school in 1987, I joined American Pet Center in Chandler, Arizona. The owners decided to sell it in 1989 and offered the combination veterinary hospital and pet store to me. I turned everything into a pure veterinary hospital.

In 1995, I added emergency care because, despite 10 veterinary hospitals operating within a five-mile radius, no one offered the service. In 2002, we added specialty medicine. An opportunity to buy another emergency hospital arose in 2006. Today we have clinics in Chandler, Mesa and Phoenix. All are accredited by the American Animal Hospital Association and have earned Cat Friendly Practice and Fear Free recognition.

One key to a successful ESOP is ownership thinking, or encouraging the staff to think like owners. I’ve always believed in an empowered staff, which meant giving team members added responsibilities. I expect everyone to be the best and to do things at a high level. I learned from studying businesses like Nordstrom, Disney and the Mayo Clinic that a policy of trust is paramount. Back in the 1890s, the Mayo brothers wanted their clinic to survive for at least 100 years. That resonated with me. It was what I wanted for my three hospitals.

Then I found Brad Ham’s book “Ownership Thinking: How to End Entitlement and Create a Culture of Accountability, Purpose and Profit.” It discusses how to work a business and prepare for retirement and transition. That was the first time I heard about ESOPs. I wanted to learn more, so I studied them.

ESOPs are government-designed and complicated. I am not an expert by any means, but in the process of learning, I came across another book, “The Great Game of Business,” by Jack Stack. It advocates open-book management, transparency and sharing the financials with employees. In addition, it offered a framework for developing an ownership structure. The possibilities excited me.

I presented the idea of an ESOP to my leadership team at the beginning of 2018. We then scheduled group meetings to look closely at our income statements. At that point, I was the only one with the necessary financial literacy. Education was essential.

Many veterinary hospital owners hesitate to share the financials. Doing it is hard but wonderful. Transparency is so good. If you don’t tell your people the numbers, they’ll make them up. Everyone tends to think you’re making way more money than you are. The percentage of profit in an animal hospital isn’t as high as you’d think.

1st Pet began the necessary culture transition by turning again to The Great Game of Business. With everyone aware of what was to come, we developed a rhythm of monthly all-team huddles, weekly hospital huddles and daily working group huddles. We reviewed the financial information that employees need to know as owners. They must understand how the business is performing and how their roles affect it. In teaching financial literacy, we used balance sheets, income statements and personal budgets. After three years of ongoing financial training, employee roles haven’t changed much. We expect that once everybody sees the value of their shares increasing, they’ll want to be even more involved in the decision-making. We ask our employees for ideas to improve the business. A committee implements the best ones.

Management will continue to play a significant role, of course, but employees definitely will have more say as time goes on.

Colleagues sometimes ask whether I had any doubts going into the ESOP. How could I not? Everything is a leap of faith. As long as you have the heart to lift, serve and help others, only good can result. I felt fear along the way but not enough to stop.

Some wondered whether I worried about shortchanging my family by choosing an ESOP. After all, the big corporate buyers are paying premium prices, and 1st Pet would be the perfect pickup for a consolidator. No, I didn’t worry. I get emails and phone calls at least every week. One time, I answered, “No, thanks,” and the company doubled down. I haven’t responded again.

How much money is enough? When is the right time to sell and retire? I have enough money. My family is taken care of.

I’d be happy to discuss the pros and cons of an ESOP with anyone. Most of all, it comes down to this philosophy: Veterinary medicine is the best career in the world, and we work with the best people in the world. So, why not guarantee a better future for those who helped build the business? That’s what an ESOP is all about.

HOW DOES AN ESOP WORK?

Under an employee stock ownership plan, the seller funds the transaction using a bank loan, seller note or contribution of shares. In the case of 1st Pet Veterinary Centers, the deal was financed with a 100% seller note.

The ESOP trustee has fiduciary responsibilities and ensures that employee needs are met. The employees receive shares as the loan is paid back.

The sale price is based on the practice’s market value as determined by an independent valuator. The valuation is repeated each year to reset the share value.

As the loan is paid off, the share value increases, all else being equal. Think of it as paying off the mortgage on your house.

All 1st Pet team members ages 18 or older who work at least 1,000 hours in a year are eligible to participate in the ESOP. In most ESOP companies, who gets what percentage of shares is determined by compensation. However, 1st Pet added a longevity component.

1st Pet’s ESOP shares are allocated based on points — one point per $1,000 in annual salary, up to 30 points. Additionally, employees earn one point for every year of employment. Full vesting occurs within six years.

Employees who retire or leave 1st Pet receive the value of their vested shares. Most will receive the payout over five years. In the event of death, disability or termination, the amount will be paid immediately.

HOW TO GET STARTED

An ESOP will work only in a company of a certain size — at least 10 workers. If the company isn’t profitable, don’t even try.

Setting up the plan is a significant expense, so smaller companies will be constrained.

Finally, find the right advisers. Some attorneys will say they’ve done a few ESOPS. That’s not good enough. Find someone who has done hundreds, if not thousands.

Julia Mohn, veterinary technician: “Employee ownership has given me a whole new outlook in my career. My job and the work I do mean so much more to me now.”

Sophia Mendoza, client service representative supervisor: “An ESOP means figuring out what we can improve on, celebrating the wins, working through our losses and learning from them. It means taking ownership of what you do to help our company and helping team members realize the importance their roles play in this.”

Sierra Rommel, certified veterinary technician: “The ESOP means a future for me and my family. It means I have something long term to look forward to and a retirement plan I don’t have to stress about. Being an owner also means that I, too, have a say in our company along with the rest of our team.”

Dorothy Flores, veterinary technician supervisor: “Ever since we started to practice The Great Game of Business, I have better financial literacy and a better understanding of how our day-to-day actions significantly impact the business. I now have a better understanding of what it entails to run a profitable business while keeping our main focus in mind: excellent client service and patient care.”