Practice ownership can happen early in a veterinarian’s career, and perhaps at a lower cost of entry, through one of a small number of franchisers.

Written by Ken Niedziela in June 2019 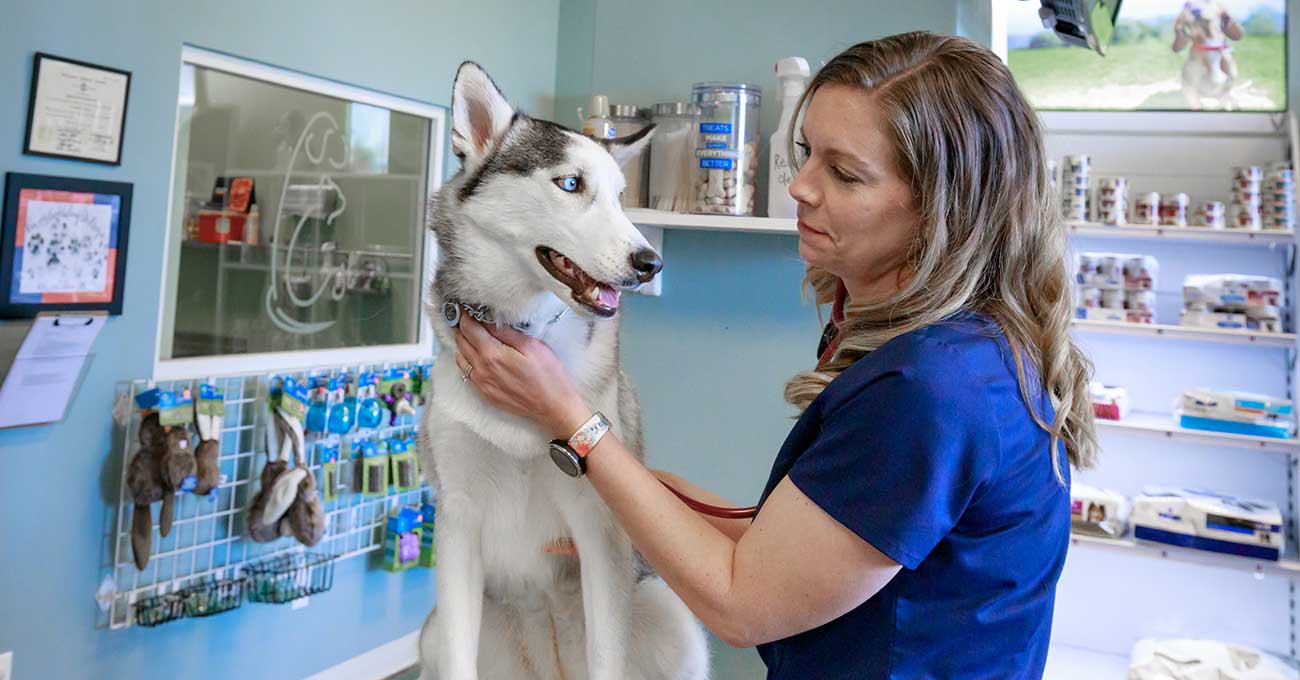 Dr. Angie Hawkins is an Easyvetclinic franchisee in Murfreesboro, Tennessee.

The decision was easy for Angie Hawkins, DVM. Six years after graduating from Mississippi State University and still owing more than $200,000 in student loans, the married mother of two chose to do what few veterinarians do: Become a hospital franchise owner.

Dr. Hawkins signed the paperwork with the startup company Easyvetclinic, took out an $80,000 loan and in July 2017 opened the first Easyvetclinic franchise in a Murfreesboro, Tennessee, strip mall. Just like that, she was a solo practitioner, running a walk-in wellness clinic, setting the hours to suit her lifestyle and, soon enough, turning a profit.

“We initially wanted to buy an existing practice,” Dr. Hawkins said of she and her husband, a Tennessee Department of Transportation district supervisor, “but the debt we would have had to take on didn’t seem feasible. And then we considered starting a full-service clinic, and again the amount of debt wasn’t feasible. So I reached out to Easyvetclinic, and the low startup cost and not going into much more debt got my attention.”

Veterinary clinic franchises are rare. Independent practices make up about 85% of the U.S. market, and corporate-owned or managed hospitals comprise nearly all the rest. Banfield Pet Hospital, which oversaw more than 200 franchises, or charters, around the time of its 2007 purchase by Mars Inc., today has none among its 1,050 practices.

The number of franchise companies in the veterinary space can be counted on four fingers:

Scott Oppat, president of Veterinary Financial Services, who for eight years helped Banfield with its charter operation, calls franchises “a halfway step between being an associate veterinarian and being a complete standalone doctor.”

“If you take the hamburger industry, for example, when you buy a McDonald’s franchise you expect that McDonald’s knows what they’re doing and will bring all the systems, efficiencies and marketing to the table,” Oppat said. “One of the expectations of a franchisee is you’re going to get cost savings and management assistance.”

Easyvetclinic’s CEO, Tim Schoenfelder, knows all about restaurants and franchises. He spent years in the food service industry as a restaurant owner and franchise manager before he gravitated to the pet space as an Invisible Fence dealer. He still owns three dealerships, but it didn’t make him a veterinary expert. For that know-how he met a veterinarian and together they opened their first practice — now called PetWellClinic — in Knoxville, Tennessee, in 2013.

“He was on the medicine side and I was the visionary,” Schoenfelder said. “The second year we managed to break even and I wanted to start franchising and go big, but he wanted to go slow. So he bought me out.”

Schoenfelder leans on Easyvetclinic medical director Christian Cumberbatch, DVM, as the veterinary authority. Dr. Cumberbatch, a 2002 Tuskegee University graduate who once owned three practices in Toronto, Canada, wears a second hat as the owner-operator of a 6-month-old franchise in suburban Atlanta.

An Easyvetclinic franchisee will spend as much as $150,000 to go into business, Schoenfelder said. That includes a $35,000 franchise fee as well as construction, equipment and inventory costs and working capital. After that are a 7% royalty on revenue and a few other charges.

Dr. Hawkins needed the management support. “In vet school, we learned all about how to be a vet, but we really don’t learn how to be a business owner,” she said. “Having somebody that understood that side of things was a big comfort for me.”

Easyvetclinic franchisees have flexibility in the hours their practice is open. Schoenfelder recommends working Saturday.

“Saturday is the day people get up, get their stuff done, and the visit is one of those things,” he said.

Dr. Hawkins’ clinic is dark two Saturdays a month and Sundays. She sees about 20 patients “on a good day,” she said, and hires a relief veterinarian when she needs time off. Dr. Cumberbatch has split days off: Wednesday and Sunday.

“That works with my family life,” Dr. Cumberbatch said. “Wednesday with swimming, with my three kids and everything.”

A focus on exams, tests, minor ailments and preventive care — no radiographs or surgery — lightens a franchisee’s workload and equipment costs, and it promotes a better work-life balance, he said.

“One of the things Dr. Angie remarked to me was that when she takes her days off, and even when she takes a vacation with her family, she doesn’t have that stress,” Dr. Cumberbatch said. “There isn’t that nagging spot in the back of her mind: ‘What’s happening at the clinic? Do I need to check in?’

“You go home, you don’t feel burnt out.”

Surgery has no place in Schoenfelder’s business model.

“Some doctors I talk to are like, ‘How can you make it if you’re not doing surgeries?’ They think, ‘Man, that’s a $4,000 surgery,’” he said. “But when you start to back into those numbers, they’re not that profitable in the amount of time it takes, the expensive drugs it takes, the recovery, the go-back, all that stuff.

“And meanwhile, while you’re doing that two- or three-hour surgery, you’re not doing wellness exams and all those other things.”

Oppat, whose consulting business caters to veterinarians looking to acquire or expand a practice, said many of the responsibilities that franchisers like Easyvetclinic take on can be fulfilled elsewhere.

“What is it a franchiser brings to the table?” he said. “They bring efficiencies of scale, and so you get benefits for your cost of goods and that sort of thing. But you can do that by going to [group purchase organizations like] PSI, for example. Will they bring management expertise? Yeah, but a number of companies out there will do that for you. You could join one of the consolidators that basically does back-office work for you.”

“You’re going to pay some percentage of your revenue to the franchiser,” he said. “In addition, you don’t own the business in the [traditional] sense. You have a license to operate under that platform. If you fail the agreement in one way or another, they have the option to take back that business.”

“Kids don’t go to vet school thinking they can own one when they get out,” he said. “They think they have to go work five or 10 years and then do it. What we are saying is, ‘Look, we’ve got banking or financing partners that have no problem with a kid coming out of school, even with their loan debt.’ They have no problem helping someone get a franchise going and like the fact there’s somebody to hold a hand on the business side.”

NO FRANCHISEES? NO PROBLEM

Robert Vaughan, DVM, the founder of Bingle Veterinary Clinic in Houston and a satellite location in Katy, Texas, thinks his business model is ripe for franchising. Dr. Vaughan, whose second clinic was profitable six months after it opened, has launched a franchise company in partnership with his wife — hospital administrator and marketing veteran Caroline Vaughan — and Bingle veterinarian Andrew Tesh, DVM.

Bingle is marketing franchises to three types of veterinarians.

A Bingle franchisee will spend $500,000 to $775,000 to find a brick-and-mortar site, outfit it and pay the $39,500 franchise initiation fee. On top of those costs are a 6% royalty on gross revenue, 2% of the previous month’s revenue for local marketing and an additional 2% to support Bingle Veterinary Clinic’s overall marketing effort.

What franchisees get in return are a 400-page operating manual, initial and ongoing training and guidance, marketing support, and Dr. Vaughan’s strategy for success at both his Houston general practice, which opened in 1995, and at the 3-year-old Katy clinic.

“We took the franchise procedure, franchise system and franchise model and imprinted it onto that satellite location just to make sure it would work, and it did very well,” Dr. Tesh said. “It was our litmus test to make sure we had a viable business model.”

Franchise owners will be free to do many things their way.

“We don’t tell the owners how to practice medicine,” Dr. Tesh said. “We help with the operations of the actual business — that is a very large part of our manual — and we will hold our franchisees accountable to business operations, not how you treat a sick pet.”

Franchisees can open a general practice or any other type of veterinary hospital.

“Each clinic will be independently owned and operated,” Dr. Tesh said. “We are providing the business structure only.”

UC Davis Finds Its Next Dean in Colorado