When people hear about our Marine Corps-style “classic leadership” approach, no doubt they imagine a drill instructor nose to nose with a nervous recruit, relentlessly barking orders and insults. So how, they might ask, could such a style succeed in the veterinary services industry? The answer: In more ways than you might think, but it has nothing to do with barked orders. 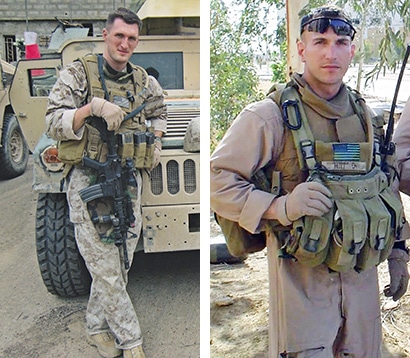 Before entering the business side of veterinary medicine, Paul Habenicht, left, and Nick Lodestro were U.S. Marines.

In-your-face leadership is more a tired stereotype than a reality in today’s U.S. Marine Corps. The fundamental tenet at the core of classic leadership is what the two of us learned in the Corps, and it remains at the heart of what we strive to do every day as the co-founders of VetEvolve: Bring out the best in people and set them up for success.

Our mission-first mindset, coupled with a perpetual belief in taking care of people, is what drew us to veterinary practice ownership seven years ago. Since then, we have found that by empowering teams to make decisions and providing the resources they need, they succeed even during the most challenging times — as the pandemic brought to the forefront.

We learned in the Marine Corps that amazing things could be accomplished with the right team, right leadership and right examples. Employees who see those leaders at the helm know they have the freedom to practice what they love: caring for animals.

Marine Corps leadership is all about quality, real-life repetition. Each day, Marine leaders have multiple opportunities to lead from the front and set the example. Only in doing so can they earn the trust of those they lead. And it is through that trust that the true power of collaborative teaching and decentralized leadership accelerates. It is the path to the highest performance, whether a person is on the battlefield or in the comparatively tranquil confines of a veterinary clinic.

The four components of leadership we learned in the Marines are with us today. Let’s call them our Corps Principles.

This is the overarching “why” that shadows every task or initiative. By discussing intent at the start of a project, transaction or initiative, team members understand what to do in the absence of specific guidance. Intent tells them how to drive on with the initiative. When a project loses steam, we find that poorly articulated or misaligned intent is usually the root cause.

This helps us with planning, execution and follow-up. We have adapted the well-known Marine acronym BAMCIS to suit our purposes. Here it is spelled out:

When we do all those things correctly and in order, much gets accomplished. Conversely, working backward through the steps and finding the missing one usually leads to the hiccup hampering execution.

This refers to the base setting on a common weapon system. The specifics are not important in the veterinary context, but what is essential is that each Marine learns to complete headspace and timing using a small metal gauge and an easily repeatable process. Simply put, if headspace and timing are off, the weapon will not function as designed. In our veterinary business, we often ask, “Have we checked the headspace and timing?” To Marines, that is the reminder to make sure everything is set up right, that each person understands the basics and that we are ready to get to work. We found the concept to be a great reminder during our post-military lives.

Marines debrief at the end of every operation, whether during training or in battle. At the end of a long week, the call of the chow hall and sleep can make taking the time to assess what happened very difficult. This is the USMC’s version of continuous improvement and something business leaders love to discuss. To us, the concept isn’t novel — the Marine Corps has practiced it since 1775. We would encourage all leaders to sit and talk with junior team members after an initiative. Get their thoughts during the debrief. It’s so important to a successful next task.

We gratefully learned all these lessons at a young age, and under tough conditions, in the early 2000s. We saw firsthand that cracks in any leadership foundation became evident in times of difficulty. We understood the importance of good-quality repetitions so that high standards are upheld during the inevitable tough times.

Leaders owe it to their employees to be at our best and ready for the next challenge. That is what the two of us took from the Marine Corps.

In reruns of the old TV series “Gomer Pyle, USMC,” Sgt. Carter still gets laughs with his classic, in-your-face style of “leading” Gomer. But when it comes to classic leadership in the veterinary services industry, we find it best to leave the barking to the patients.

Paul Habenicht is co-founder of VetEvolve, a Richmond, Virginia-based veterinary hospital network founded in 2014. A graduate of the U.S. Naval Academy, he served in the Marine Corps from 2002 to 2007, attaining the rank of captain. His last deployment was with a reconnaissance unit in Iraq’s Al Anbar province. He earned an MBA from the University of Virginia in 2009.

VetEvolve co-founder  Nick Lodestro earned a bachelor’s degree in finance from Penn State University before serving in the Marine Corps from 2002 to 2007. Among his responsibilities were planning and executing counterinsurgency missions in and around Fallujah, Iraq. He was awarded the Purple Heart after being wounded in Fallujah. He earned an MBA in entrepreneurial studies from Babson College in 2013.

Loving Our Pets in a Diverse World