Written by Kate O’Hare in February 2020 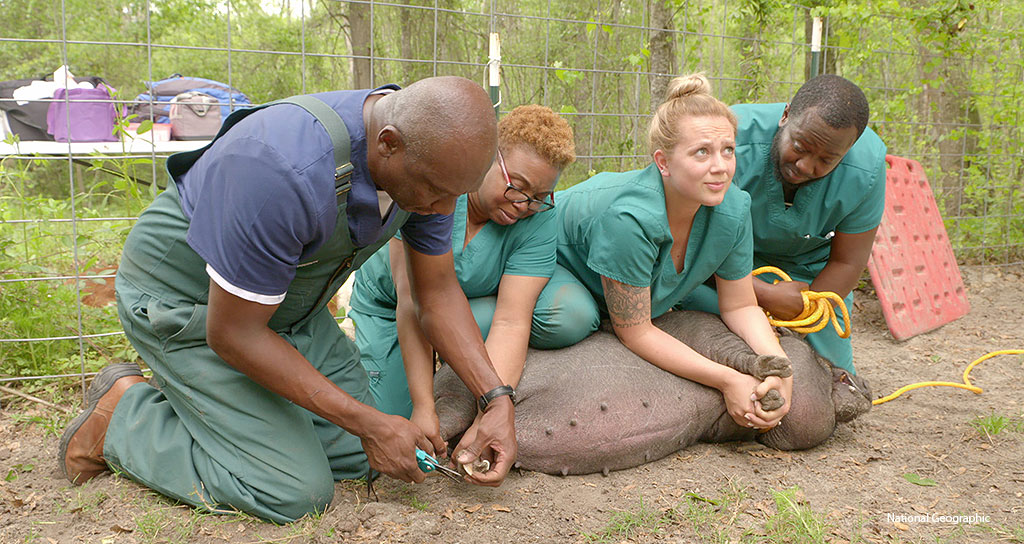 Dr. Terrence Ferguson trims a pig’s hoof as his team holds down the animal. “Critter Fixers: Country Vets” premieres Saturday, March 7, at 10 p.m. ET/PT on Nat Geo Wild. The series runs March 7 to April 11.
It’s a tense moment at Critter Fixer Veterinary Hospital in Bonaire, Georgia, as Vernard L. Hodges, DVM, struggles to get a French bulldog puppy to breathe after a planned C-section. Earlier, Dr. Hodges and his business partner, Terrence Ferguson, DVM, did pregnancy checks on four alpacas and treated a skin condition on a rescue horse. It’s a day in the life of the longtime friends and Tuskegee University College of Veterinary Medicine classmates, the stars of a six-episode TV series called “Critter Fixers: Country Vets,” premiering March 7 on Nat Geo Wild. “Critter Fixers” is the second new veterinary show on Nat Geo Wild in 2020, following the Jan. 25 premiere of “Heartland Docs, DVM,” about married Nebraska veterinarians Ben and Erin Schroeder. Drs. Hodges and Ferguson’s mixed-animal practice opened in 1999 and now occupies a 7,000-square-foot facility, the only one in the area to offer digital radiography. The docs answered questions by email about balancing patient care with the demands of reality TV. 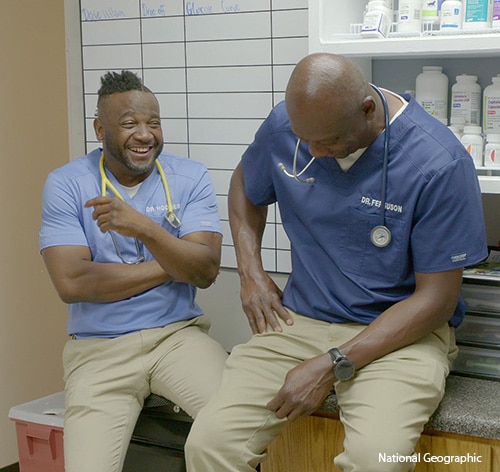 What made you want to do this show? Dr. Ferguson: Having a television show to showcase your life and business is an opportunity not afforded to many people, so I didn’t even consider turning it down. Dr. Hodges: My next goal is to show the world how great veterinary medicine is and show that there is diversity in our profession. African-Americans comprise less than 3% of the veterinary population. I often hear “I’ve never seen a black vet.” I feel a television show gives me a platform to show the diversity of our wonderful profession. How did you prepare for TV cameras to invade your practice? Dr. Ferguson: There was not a lot of prep. We basically had to get the staff ready for cameras to be in their faces and ready the clients. If they didn’t want to participate, they didn’t have to, but nobody turned it down. Dr. Hodges: We have a rather large staff, so the main thing was letting my staff know that we would be on a worldwide stage and not to be camera shy. I told them to just do their normal routines and everything would be fine. I also had to let my clients know that we would be filming in the office daily. My clients were great sports about the whole process. How did you balance the demands of TV production and still serve your patients and their owners? Dr. Ferguson: It was tough initially because filming slows down the workday. Fortunately, we are blessed to have other vets on staff that could fill in the gap and help the practice run as smoothly as possible. Dr. Hodges: I made sure to return all phone calls; sometimes it was just at the end of a 15-hour workday. What do many pet owners not realize about veterinary medicine? Dr. Ferguson: Most of the tests we run and treatments we perform on our patients are the same as those used on humans. We are professionals and provide quality similar to your family doctor. Dr. Hodges: We have to know that different species get different diseases, and we treat different species differently. We also have to be veterinary pharmacists and know the correct medications and dosages to treat these various diseases. Veterinarians also use the latest technologies, such as ultrasounds, digital X-rays and ECGs, and we have access to specialists via telemedicine, which is very important to a rural veterinarian when specialists are 2½ hours away. What do you think about the state of the veterinary business? Dr. Ferguson: The professional outlook for veterinarians is tremendous; it has never looked brighter. Currently, there is a shortage of veterinarians, which is another reason we wanted to do the show. Dr. Hodges: Veterinary medicine, in my opinion, is at an all-time high. I have seen the human-animal bond increase tremendously over my 20 years in practice. People will do whatever is necessary to keep their animals healthy. Would you encourage a young person to go into veterinary medicine, and if so, why? Dr. Ferguson: Yes, if animals are their passion. This is the best job you can have if you are an animal lover. I’d also lend a hand to that young person as much as I could. Dr. Hodges: Of course I would. We have our challenges, such as student loans and low salaries in some areas, but I can think of no better profession for the animal lover. What is unique about veterinary practice in middle Georgia? Dr. Ferguson: Down here in the country, we form close relationships with our clients. We opened our practice over 20 years ago, and many of our clients are like family. Dr. Hodges: I’ve only practiced in Georgia, so I can only give a perspective as a Georgia veterinarian. We deal with a lot of allergies and parasitic diseases. Oftentimes we will have transplants from the North who call and say, “What are these black things crawling on my pets?” They’re fleas, of course. We see the full gamut of parasites — fleas, ticks, mosquitoes and cuterebra. I often talk to my classmates in California and other places out West about heartworm, which is not as prevalent there. What's your favorite thing about being a veterinarian and your least favorite? Dr. Ferguson: My favorite thing is when a client brings in a new animal, and I know it’s the beginning of a long, loving relationship. My least favorite thing is when we have to help clients make the difficult decision to euthanize an animal. Dr. Hodges: My favorite thing is no day is ever the same. My least favorite thing is having to pay attention to the hospital finances. Our hospital offers a lot of cutting-edge treatment, such as laser therapy, ultrasound and chemotherapy, that I want to give to all my clients, but the truth is not everyone can afford it. I do my best to offer discounts, but it’s sometimes heartbreaking knowing that new advances in medical technology can help a patient but can be quite costly. Based in Los Angeles, Kate O’Hare is a veteran entertainment journalist and a rookie screenwriter. Follow her at Authory.com/KateOHare.

Why Practice Owners Must Take Time Off