Robot team members? Expanded use of artificial intelligence in veterinary education and diagnostics? Get ready.

Innovation Station guest columnist Rolan Tripp, DVM, CABC, is a veterinary futurist, certified animal behavior consultant and artificial intelligence software developer at Pet Happiness Network [pethappiness.net]. He is a graduate of the University of California, Davis, School of Veterinary Medicine, president-elect of the Society for Veterinary Medical Ethics and the founder of the Veterinary Future Society. 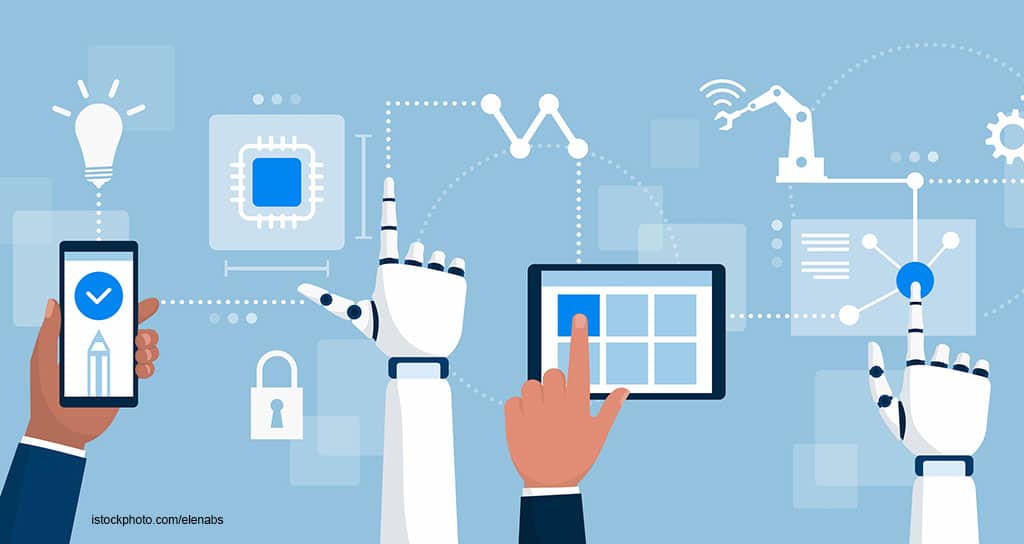 The line between robotics and biological engineering is becoming blurred as advances overlap.

Imagine a pet owner enters a veterinarian’s office and is greeted by a 5-foot-tall robot that provides limited but flawless reception services. Given audible instructions, the client and his pet enter a designated exam room. There, a human veterinary nurse performs hands-on procedures like a dental exam and blood draw. She then activates another robot and leaves the room. This robot uses a voice interface and a touchscreen on its chest to collect a detailed medical history. The final portion of the visit is done by a remote televeterinarian who instructs the client to position the pet for the best camera view. The veterinary nurse is summoned to the exam room when needed. If special procedures or hospitalization are indicated, the pet is taken to a central room staffed by people using 3D video connected to anyone in the world.

Far-fetched? Not for long.

The Birth of Robotics

Humanity’s fascination with robots is as old as the ancient world. In historical times, some kings tried to fool the uneducated by using bronze fortune-teller heads that gave prepared answers to questions. All the fake head did was offer the king’s superstitious opinions. Today, talking machines are no longer a myth. Assistants like Siri, Alexa and “Hey Google” are becoming an essential part of our lives. Going even further, innovator Elon Musk revealed that Neuralink, one of his start-up companies, is creating a wireless, implantable brain-machine device designed to achieve human symbiosis using artificial intelligence (AI).

Modern medical robotics began with devices for human prosthetics, rehabilitation and disability assistance. They are now increasingly mechanized. Because many new technologies are routinely developed using animal subjects, the benefits are easily adopted into veterinary medicine once the models become affordable and more readily available.

Let’s explore where things stand and the possibilities.

Robotics in Surgery and Education

Human robotic surgeries began near the end of the 20th century as early prototypes were tested and upgraded. Developed by General Motors in the mid-1980s, the PUMA (Programmable Universal Machine for Assembly) was the first robotic surgical system. Despite its popularity, PUMA had a short lifespan due to liability issues. Later, surgical robots were fitted with smaller arms for precise incisions and injections, or in the case of IBM’s Robodoc, for precise bone drilling during hip replacements. By 2000, the most notable breakthrough involved the Da Vinci minimally invasive surgical system, which has been part of over 6 million human surgical, laparoscopic and endoscopic procedures.

Meanwhile, the University of Pennsylvania School of Veterinary Medicine in 2011 opened the then-state-of-the-art Buerger Family Minimally Invasive Surgery Suite. PennVet stated, “We are now outfitted with the same advanced technologies found in the world’s top human hospitals.” The integrated operating room strives to connect the medical team, robots and the suite itself through voice control of temperature, humidity and more.

Many progressive veterinary professionals embrace One Health and the view that integrating human and animal care will speed our acceptance of robotic and AI technology. In 2006, the Association of American Veterinary Medical Colleges launched a task force to explore AI developments in the field of veterinary student education. Trying to envision the future, the task force report identified artificial intelligence as one of the most significant factors in the future of veterinary training and education.

What is increasingly obvious is that AI robots will become autonomous over time and evolve autonomously. Recently, the Smart Tissue Autonomous Robot (STAR) system, designed by Children’s National Hospital in Washington, D.C., outperformed several human surgeons in collecting pig heart valves for human transplants. Not only did STAR provide consistent results that exceeded human abilities, but it never tired of repeating the same procedure over and over. Although human doctors are needed to handle complications, most of the process is fully robotic.

Some thought leaders, like Musk and Microsoft co-founder Bill Gates, predict that machine artificial intelligence will eventually equal and then overtake full human intelligence. The crossover point has been dubbed “The AI Singularity.” A popular Netflix documentary, “The Social Dilemma,” makes the point that machines have surpassed human weaknesses in areas such as memory and calculation.

Therapy robopets, now sold as toys, are given to lonely, hospitalized children and convalescing seniors when live pets cannot be present. Robotic animals also can be found in veterinary continuing education. Used for simulation, robot dogs and cats provide lifelike test subjects for a variety of training exercises, from CPR scenarios to external clinical assessments. In 2010, the Cornell University College of Veterinary Medicine introduced Robo-Jerry the dog and Robo-Fluffy the cat. The inventor, Dr. Daniel Fletcher, who serves as chair of Cornell’s Educational Technology Steering Committee, is working on Butch, a more advanced model.

The line between robotics and biological engineering is becoming blurred as advances overlap. For example, robot bees are used in horticulture to boost lagging pollination rates. Other programs, like the National Oceanography Centre in Wales, have used marine robots to simulate life in the ocean’s depths. The cost and technical requirements of such machines have led some researchers to leave biomimicry behind and seek more organic alternatives.

From slugs to fish to mammals, live animals given implanted components provide an often cheaper, easier and more effective adoption of robotic technology. In one example, fish have been genetically engineered and equipped with sensors designed to flash colors when in contact with specific toxins. Remotely controlled rats can help with explosives investigations, vector control and disaster response. Researchers at Case Western Reserve University combined tissues from a sea slug and 3D printed materials to build biohybrid robots that crawl like crabs as they clean the beach.

We can expect an ongoing merger of AI and robotics. Although the idea frightens some people, this development likely will lead to a higher standard of veterinary care. Questions remain concerning the costs, ethics and commercialization.

Like it or not, machines are pushing us from one industrial revolution to the next. Only 20 years ago, who predicted broadband wireless internet, cloud computing and smartphones? Simply thinking of smartphones as AI robots will make the transition to the future less scary and more exciting. Veterinarians who pay attention will have front-row seats and help drive our profession’s technological evolution.

How Healthy Is Your Cybersecurity?