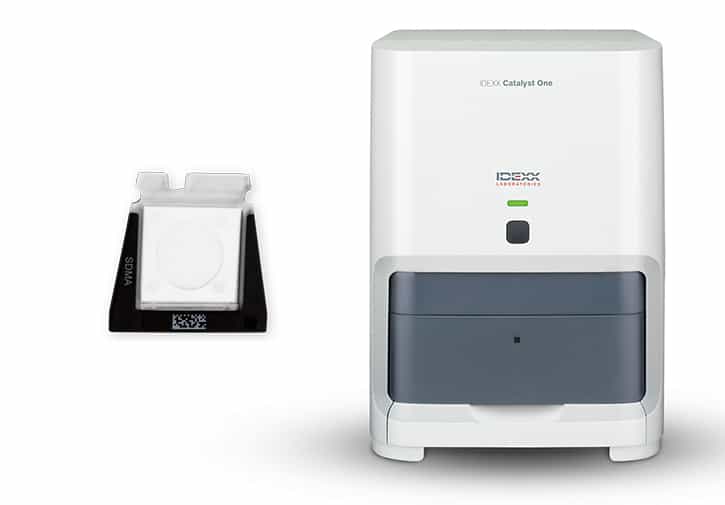 The Catalyst SDMA Test, left, may be used with the Catalyst One (shown) or Catalyst Dx chemistry analyzers.

Idexx Laboratories Inc. has announced the North American rollout of the point-of-care Catalyst SDMA Test, a check of kidney health in dogs and cats.

The Westbrook, Maine, company reported Jan. 8 that it shipped 2,731 preorders of the 12-test box and was about to ship an additional 1,762 preorders.

The test is designed to be added to any chemistry panel and run on the Catalyst One and Catalyst Dx analyzers. Results are returned within minutes, Idexx stated.

Company chairman and CEO Jonathan Ayers called the SDMA Test “one of the most significant diagnostic innovations in veterinary medicine in the last 30 years.”

“We’ve seen great enthusiasm for the ability to run SDMA as part of the routine chemistry panel at the point of care, and preorders have exceeded our expectations,” he said.

The SDMA Test was introduced at Idexx reference laboratories in 2015. The test is “proven to identify kidney disease earlier than creatinine, enabling veterinarians to intervene earlier to meaningfully impact a patient’s health outcomes and quality of life,” Idexx stated.

The company also reported that it will work with Yale University researchers to explore how SDMA might be used in human medicine.