Graduations symbolize and make real the transition from one state of our lives to another. 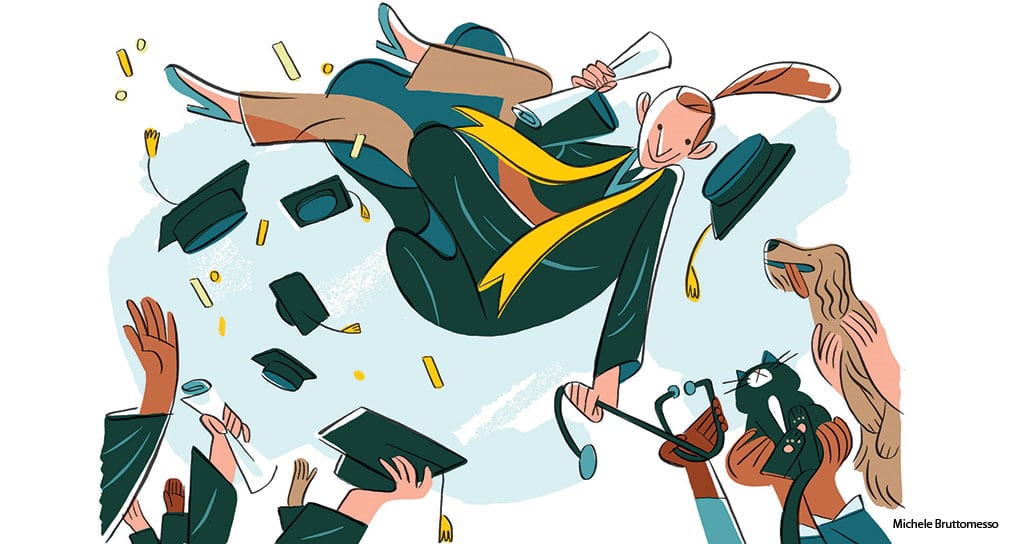 We should have internal graduations when we change jobs, get promoted and lose our first patient.

For many of us, graduations are foregone conclusions. We never considered not graduating from high school, college or veterinary school (although, for me, a little concern was probably warranted during a few rocky points). We saw graduations as mile markers on our path. We showed up at the ceremony, sat through the program, smiled for a photo and went on. I think that is both a problem and a tragedy.

Graduation is one of the few remaining examples of societal rituals in modern life. We enter the ceremony before the eyes of our tribe, participate in the ritual and emerge into a new phase of life. Like the transformation from child to adult in coming-of-age rituals, the spiritual rebirth of an individual through baptism (if you’re of the Christian persuasion) or the joining of two lives into an ongoing partnership in marriage, graduations are meant to symbolize and make real the transition from one state of our lives to another.

Veterinary medicine, and our world in general, are going through seismic social changes. The way that people communicate, discuss and debate is shifting. Clients want to text and chat instead of talk on the phone, and our records are mostly or entirely electronic or even cloud-based. Office buildings sit empty as employees decide that they prefer working from home, and veterinary offices are eyeing strategies that might allow some of that flexibility into our industry. Meanwhile, all this happens as private equity groups steadily buy up independent veterinary practices and roll them together to run (or sell) as groups. The amount of change we are seeing is monumental, and for many, it’s overwhelming.

The Challenge of Change

I spend a lot of time talking with veterinarians about their struggles in practice. “Resistance to change from the staff/doctors” is one of the three most common challenges I hear. (If you’re interested, the other two are hiring and, because hiring is not happening, working short-handed.)

“How do I get people to stop clinging to what they’ve done in the past?” they ask me. The answer is rooted in why the specific change is resisted, but a few main reasons often seem to emerge. Here are the big three.

1. Not All Change Is Good

First, change for the sake of change is exhausting and often unnecessary. Some people (myself included) tend to get bored and want to do something differently. While this notion is understandable to anyone with a creative streak (or attention deficit disorder), it’s not a great reason to reorganize the workflow of a dozen people who were mostly happy with the process and outcomes that they had before.

Also, we all have had ideas we fell in love with that were obviously bad ideas to everyone else. Some of those ideas have names and social media profiles that our friends like to remind us about. Others came from motivational speakers, self-help books or our flash of inspiration. Regardless, we all have ideas for change that wow us and no one else. Resistance to change in those cases is understandable and positive.

People sometimes resist change because of the human tendency to tie together who we are, what we do and how “valuable” we are as individuals. We identify ourselves as “real veterinarians” and then are paralyzed to make career changes that would cast us in a light that doesn’t support that label. We deem ourselves “the practice organizer” and then step on other peoples’ toes when our organizational assistance is no longer needed.

I once worked with a veterinary technician who despised the idea of our practice going paperless or even paper-lite. She fought tooth and nail against the change and put forward every objection she could think of. The truth ultimately revealed that her resistance didn’t have anything to do with how well the paperless system would work in our practice; it had to do with the fact that she couldn’t type and was certain the change would devastate her status as a leader in the practice and her self-worth. Until the proposed change’s effect on her self-identity was addressed, there was simply no way she would accept the new approach. When change invalidates people’s identities, they will fight against it to the bitter end.

3. Change Means a Loss of Control

We experience the world very differently when we feel we have control compared to when we do not. My favorite experiment illustrating this point was done in 1971 by a researcher named D.C. Glass (and collaborators). In the experiment, two groups of people were tasked with proofreading documents as a particularly annoying buzzer went on and off. Both groups were told they would be judged on the speed and accuracy of their proofreading (and they were). In addition, all participants were hooked to a machine that measured their galvanic skin response — basically, how much they were sweating. This was a commonly used approach to estimating a person’s stress level.

The only difference between the two groups was that the members of one group had a button they could press to make the buzzer stop. The group’s members were told that such behavior was highly discouraged but that they could use it if absolutely necessary. When the experiment concluded, no one in the “button group” had pressed the button. However, they were less stressed and showed signs of stress for a shorter period than people in the no-button group. They also did a better job of proofreading!

Feeling like we have some control, even if it’s a button we’re encouraged not to push, makes adversity more manageable. On the other hand, when we think we have no control and were thrust into a situation we were not prepared for or did not ask for, it is disconcerting at best and, at worst, terrifying.

So, why do we need more graduations?

As much as we try to convince ourselves otherwise, the world is beyond our control. Whether change comes at us from a boss, a unified staff, a family member or a global pandemic, we are sometimes put in positions where our only option is to respond to forces beyond our control.

Also, the identities we create for ourselves are dated. How we see ourselves must change as we age, move into different phases of life and experience the world’s impermanence. It’s not possible for us to decide our identity and never waver from it when everyone and everything around us is destined to change.

Graduations (and similar rituals) are statements to ourselves that while change might be thrust upon us without our consent, we have the power to change ourselves in response. We can redefine ourselves and our identities. We can declare we are no longer who we were in the past but are something new. We are in a new phase of life, a new chapter or a new position. What we had in the past and who we were are not lost but instead are built upon, and we are now the people we need to be because we have respectfully set the past behind us.

As graduation season in veterinary schools descends upon us, I hope that those students-turned-doctors will internalize the ceremony they go through. I hope they will understand that they are no longer students paying for knowledge and deferring to the specialists who trained them but instead empowered professionals who make hard decisions and earn a living using their acquired knowledge. They are changed people when they walk across the stage. I think too many of us miss this part.

We sit through graduation, say the words and go on as if nothing happened. Yet, years later, we still wonder when we will feel like professionals instead of impostors. That’s because we did not lean into and believe in the ritual.

Just as we graduate from being a student to an empowered doctor or licensed technician, we should graduate in other phases of our lives. We should have reflection points where we look around, realize that we are in a new chapter of life, and redefine ourselves to lay the past behind us and validate ourselves going forward.

We should have internal graduations when we change jobs, get promoted and lose our first patient. We should graduate when we go from leading a practice with 12 employees to leading one with 25. We should give ourselves a symbolic passage when a trusted and valued employee departs and leaves us with a team that suddenly feels and functions radically differently from before. We should decide what “graduation” looks like in each case and then put ourselves through the ceremony.

Maybe graduation involves a bottle of wine with a friend, a new white coat, a switch from scrubs to dress clothes in the office or just an email signature change. Whatever the symbol is, we should take it seriously and consider it an intentional movement to the next phase of our life. We should honor the past and then begin building upon it.

Change is scary because, if we are not the one driving it, it challenges how we see ourselves and reminds us how little control we have in this life. Graduations — rituals of declaring ourselves changed — allow us to accept new identities and own our presence in an ever-changing world. They don’t have to be flashy or public or even outside our heads, but they are important.

So, for what graduations are you past due? What part of your life is behind you, yet you cling to it and see yourself in it? Maybe it’s time to formally end that chapter of your life and define yourself as who you are today, not who you were in the past.