Written by Graham Garrison in October 2018 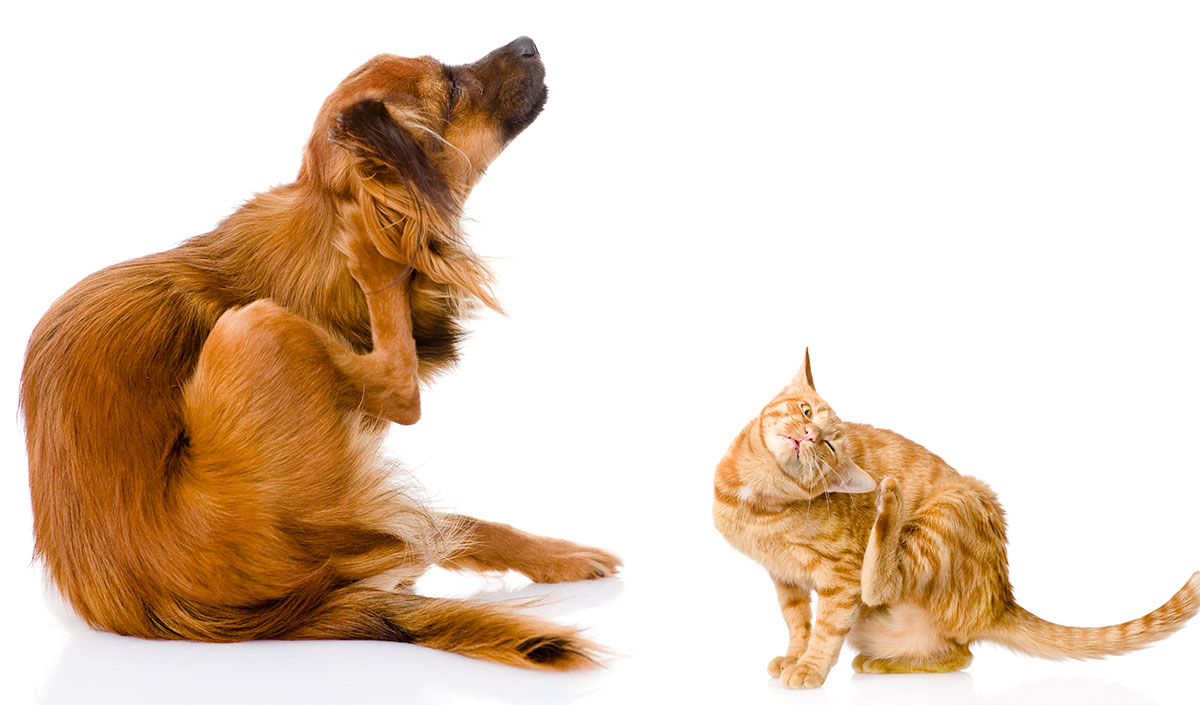 An invasion is happening in the United States. Creepy crawlies carrying all sorts of vector-borne diseases are on the march or airborne. And neither pets nor people are safe.

Illnesses from mosquito, tick and flea bites have tripled in the United States, with more than 640,000 cases reported from 2004 through 2016, according to a report by the Centers for Disease Control and Prevention. Nine new germs spread by mosquitoes and ticks were discovered or introduced into the United States during this time.

“Zika, West Nile, Lyme and chikungunya — a growing list of diseases caused by the bite of an infected mosquito, tick or flea — have confronted the U.S. in recent years, making a lot of people sick. And we don’t know what will threaten Americans next,” said CDC director Robert R. Redfield, M.D. “Our nation’s first lines of defense are state and local health departments and vector-control organizations, and we must continue to enhance our investment in their ability to fight against these diseases.”

Widespread and difficult-to-control diseases from mosquito, tick and flea bites are major causes of sickness and death worldwide. The growing number and spread of vector diseases pose an increasing risk in the United States. The report found that the nation needs to be better prepared to face the public health threat.

With dogs and cats trekking inside and outside households, pet owners need to be especially aware and prepared. However, judging from compliance rates of preventive products and from consumer studies, a lot of work remains to be done.

A study conducted by The Harris Poll on behalf of Merck Animal Health exposed some serious knowledge gaps among U.S. pet owners related to the identification, prevention and treatment of fleas and ticks.

More than 1,300 dog or cat owners were surveyed. The results found that despite the dangers of flea infestations, ticks and Lyme disease, many pet owners may not be as knowledgeable — or as prepared — as they think they are. In fact, one-third said they do not give their pets regular flea/tick medication and nearly half didn’t bring their pets in for routine exams to protect against these parasites. More than 3-in-5 pet parents said they were “very knowledgeable” about fleas and ticks; however, nearly 2 in 5 couldn’t correctly identify at least one symptom commonly associated with Lyme disease.

“But most are also unaware of all the other vector-transmitted diseases and how they are spread by parasites, causing sickness or sometimes even death in both humans and animals,” Dr. Ohmes said. “New diseases are being discovered on an annual basis and we as a society need to talk more about this. We need to make sure people understand that A) there is risk associated with finding a tick or having an itchy mosquito bite, and B) there are measures to be taken to help prevent fleas, ticks and mosquitoes from biting us and our pets.”

Ticks are the headliners when it comes to transmitters of vector-borne disease, and they seem to be the parasitic threat most on the move. Yet, they weren’t really more than a dot on the radar 20 years ago, according to Joyce A. Login, DVM, senior manager of veterinary specialty operations at Zoetis Inc.

“Twenty years ago, we had a hard time controlling fleas,” Dr. Login said. “We never thought anything about ticks. We were just worried about fleas and we didn’t have a good product.”

This was around the time that more effective flea products were being introduced.

“When those products came out, things changed,” Dr. Login said. “We got the fleas under relative control — although they are still winning when pets aren’t protected — but we also were able to control ticks on the back end. These products work on ticks but not everybody understood that at the time.”

Now, the situation has flipped. There is an awareness of fleas in the home, but people are understanding the value of keeping ticks off their dog.

Dr. Login attributes the change to three things. First, Lyme disease has become much more of an issue.

“When I was in practice first out of school, Lyme disease was the tiny little quirky disease only in Connecticut,” she said. “Within 10 years, it’s become huge, the No. 1 infectious disease reported in people. That’s raised awareness that ticks can be a problem.”

The second thing is that organizations such as the Companion Animal Parasite Council are educating clients about ticks and vector-borne diseases and the importance of protecting the pet.

The third point? Proximity. People are much closer to their pets.

“The human-animal bond is tighter than ever,” Dr. Login said. “The level of acceptance of what you have on your dog has changed. Fleas might have been OK in the past if you could knock it down. Now, one flea on your dog is not OK. There is a greater awareness because dogs are in the house. They are family members.”

Another reason the knowledge gap may exist is the rapid entry of parasitic diseases into regions unaccustomed to their presence. Dr. Login said the seasons and regional assumptions can get in the way of a consistent, industry-wide message on parasitic diseases and prevention.

“There is a lot of seasonality, which in general is very confusing to clients,” she said. “You need to keep them on the year-round product without fail. It’s something that we as veterinarians need to strongly believe in as well.”

The conversation will vary slightly depending on the area of the country, Dr. Ohmes said.

“For instance, an emphasis on ticks and tick-borne diseases in the Northeast compared to heartworm disease in the Deep South,” she said. “However, the mission of CAPC is to have every pet tested and protected, and the variable climate changes indicate we shouldn’t leave anything out. The biggest task is working with the pet owner to determine which product fits their lifestyle the best.”

One animal health organization that believes strongly in year-round prevention is the Companion Animal Parasite Council. In 2011, CAPC board members agreed they needed to come up with a strategy that engaged veterinarians, pets owners and even doctors on the prevalence and spread of vector-borne diseases, and parasitic diseases in general.

“What we started in 2011 was a new engagement strategy,” said CAPC’s CEO, Christopher Carpenter, DVM, MBA.

When Dr. Carpenter worked in a veterinary clinic in the 1990s, he relied on older Heartworm Society maps. The threat level in specific areas was hard to discern. Technology has changed, and so too have the capabilities to track parasitic diseases. The CAPC Prevalence Maps are designed to meet today’s data expectations.

“All of us have the expectation of pulling up the weather on our smartphones,” Dr. Carpenter said. “If I want to look up the weather in Nashville right now and see it, I can. Our goal at CAPC was to give local parasite data now to clients so that they can see what’s going on in their area. That was the foundation for all our work.”

Using the contributions of Idexx Laboratories and Antech Diagnostics as the foundation for the maps, CAPC is able to provide county-by-county rates and levels of parasitic diseases. It’s forced veterinarians and clients (if they are shown the data) to take notice. Veterinarians in one county can pull up the data and show that there were 28 cases of heartworm last month.

“People can’t be dismissive and say it’s not in their area,” Dr. Carpenter said. “It’s here.”

The other component of the engagement strategy involves forecasts. CAPC went outside the industry to help create the forecasts. They reached out to Clemson University Professor Robert Lund, MS, Ph.D., an expert at forecasting hurricanes and climatology. Dr. Lund agreed to partner with CAPC to start a forecast for parasites in companion animal pets.

How have the forecasts measured up? CAPC has never gone below 94 percent accuracy.

“Your weatherman would be proud to say if he or she was as accurate on a day-to-day basis with their forecast,” Dr. Carpenter said.

If You Tell Them, Will They Come?

Compiling the data is one thing. But what will pet owners do with the knowledge once they have it? To answer that question, CAPC worked with Bayer Animal Health on market research, Dr. Carpenter said. They asked pet owners:

“There were 2,000 respondents, and 90 percent said they would want their vets to share local parasite prevalence numbers,” Dr. Carpenter said. “Almost nine out of 10 said that if the veterinarian sent out an alert that the prevalence was high, they would make an appointment.”

CAPC also did a test with VCA Animal Hospitals involving almost 300,000 households. Local forecasts of Lyme disease or local parasite prevalence numbers for Lyme disease were e-mailed to clients. Among the results:

The combination of prevalence maps, which talk about what has happened, and forecast maps can help veterinarians engage pet owners, CAPC believes.

“CAPC has taught the industry that if pet owners know the local risk, if they believe there is a threat in their county using recent data, they will come in,” Dr. Carpenter said.

Get Ahead of It

Veterinarians can disseminate such information in a way that pet owners will fully understand the implications, Dr. Ohmes said.

“Many of us are guilty of not spending enough time talking about parasites and their risks during wellness appointments because there is so much information to cover when it comes to the health of your client’s pet,” she said. “If we can make it a priority to start these discussions before they start seeing parasites in their region, we can help prevent the number of pets being bitten by parasites.

“It only takes one bite to cause disease, and if we aren’t proactive, we may be too late.”

“Don’t wait until they come into the clinic,” he said. “Share it with your client via your Facebook page or the newsletter you send out. Share it like VCA did — via email to clients — because it’s really just an awareness.”

“We’re trying to teach pet owners that ticks and other parasites are spreading their ranges, carrying diseases and doing things you never knew you needed to be up to date on it,” he said. “We’re teaching pet owners that their veterinarian is their local expert.”

According to The Harris Poll conducted on behalf of Merck Animal Health, younger pet owners (ages 18 to 34) are especially susceptible to misinformation about fleas and ticks. They are more likely than older pet owners to falsely believe that:

The study confirmed that nearly all pet owners, regardless of age, want to keep their pets free of fleas and ticks. Ninety percent said they would “do anything” to protect their pets from pests.