Say No to No-Shows

When levying deposits or penalties (most practices don’t), communication is key. 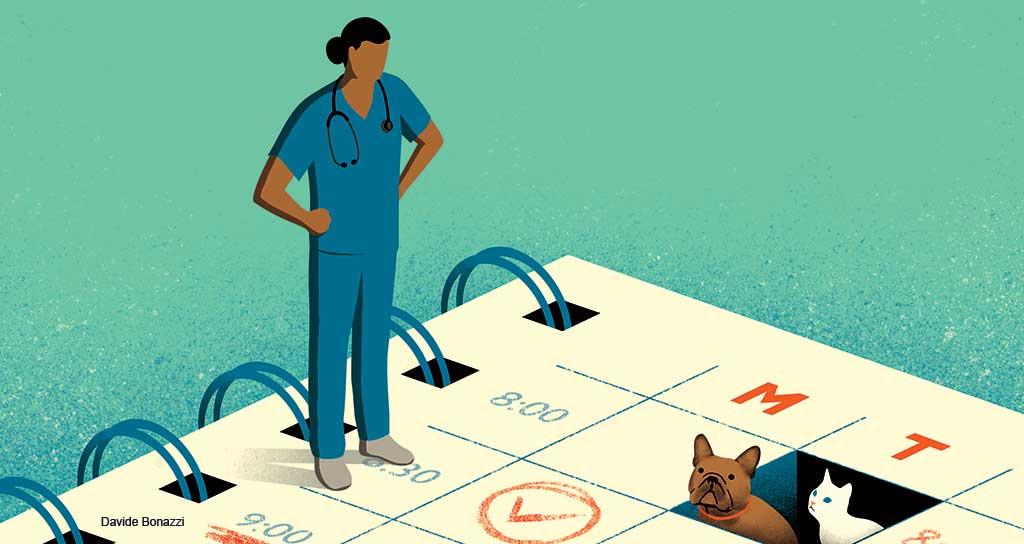 While some practices are grateful to have no-shows, which they say create breathing room in an already hectic schedule, others respond to the nuisance in a variety of ways.

It’s hard to believe we were so optimistic (naïve?) to think that the pandemic would be over in just a few weeks or months. Instead, COVID-19 has dragged on and on and presented ever-increasing challenges to veterinary practices.

Animal hospitals are lucky to be as busy as they are. That busyness has, of course, brought challenges such as the need to adapt to new ways of operating, deal with reduced staff numbers, continue to provide high-quality, caring service to frustrated clients, and keep team members safe and sane.

One result of all that busyness is the increase in appointment no-shows by both new and existing clients. Pet owners miss appointments for many reasons — concerns about the cost of the visit, fear of what they’re going to find out, transportation problems, forgetfulness, work priorities, writing down the wrong day or time.

Most of those pet owners aren’t being thoughtless. They just don’t realize the impact that a no-show has on the veterinary practice and on other pet owners desperately seeking an appointment. No-shows not only create extra work for the staff and deny an opportunity to a potential patient, but they also result in lost revenue.

Because getting an appointment has gotten more difficult amid the pandemic, some clients call multiple clinics to book appointments and then show up for the one that is soonest, most convenient or the least expensive. Too often, they don’t cancel the other appointments. 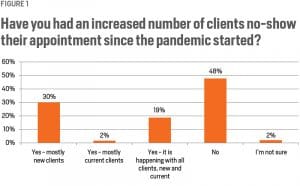 As seen in Figure 1, just over 50% of the respondents in a recent Veterinary Hospital Managers Association survey reported higher numbers of pet owner no-shows since the pandemic started, with most involving new clients booking a first appointment.

While some practices are grateful to have no-shows, which they say create breathing room in an already hectic schedule, others respond to the nuisance in a variety of ways.

If you follow online veterinary forums, you’d think that “many” practices require a deposit from new clients, but the VHMA’s Insiders’ Insights survey didn’t indicate such a trend. Only about 10% of the 304 practices participating in the November 2020 survey regularly require a deposit when a new client makes an appointment. About two-thirds of those practices started doing so after the pandemic began.

According to the survey, a little over half of the practices require a deposit equal to the exam fee, but others charge less or more. Some practices noted that, depending on the type of veterinary procedure requested, the deposit is a percentage of the estimated cost of the appointment or a flat fee.

A small percentage of practices reported negative client responses to the deposit requirement, but most said clients were neutral and booking an appointment.

The vast majority of veterinary hospitals saw a reduction in the number of no-shows after a deposit policy was implemented, though some reported a problem with clients calling 10 minutes before the appointment and asking to rebook it. It’s critical that the practice decide how cancellations and rescheduled appointments affect the deposit before such a policy is implemented. Just over half of the practices (51%) refund the deposit if a client cancels more than 24 hours in advance. A few require 48 hours’ notice. Twenty-eight percent said no refund is given. 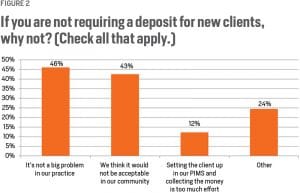 Despite the potential benefits of requiring new-client deposits, many practices aren’t implementing such a policy. When asked why, practices in the VHMA study offered several reasons. (Figure 2)

Does requiring a deposit harm the client relationship? Some veterinary practice owners and managers felt that a fee should be collected because, they said, it helps educate pet owners about the problems created with no-shows and demonstrates respect for the doctors and other team members. Others felt just as strongly that a new-client deposit would not be accepted in their community.

“I think that makes a very bad first impression on a new client,” one practice manager wrote. “Requiring them to prepay basically tells them we don’t trust them before we ever even meet them.”

While many practices that charge a deposit reported no client irritation, it might have negative consequences in smaller communities where “everyone knows everyone” and “attitudes are different,” respondents stated.

Concerns were raised about the staff time involved in discussing deposits with callers and with how to enter them into the practice information management system without upsetting new-client reports and creating other issues. One practice used the name “New Client” to circumvent the issue, kept side notes about the client and then fully established a PIMS record if and when the pet owner showed up. A conversation with your PIMS supplier’s support line can help you figure out the best way to deal with the recordkeeping.

Given how busy practices are and how much time curbside care takes, the staff issue is real. It’s not enough to toss the deposit responsibility onto receptionists. The management team must make sure the front desk and phone lines are staffed properly. 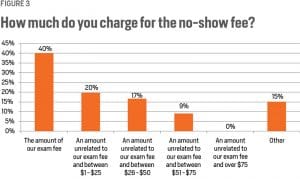 Only about 7% of the practices in the VHMA survey charge an after-the-fact no-show fee and about 20% assess a fee if a client cancels with less than 24 hours’ notice. In contrast with the new-client deposit fee, which is a newer policy for most practices that have it, the vast majority of those that charge an after-the-fact fee were doing it before COVID-19. About 40% of the practices in the survey set the exam fee as the amount charged for a no-show, but the fee varies widely among the other 60%. (Figure 3)

While the majority of new clients are OK with the concept of a deposit, current clients aren’t as forgiving about no-show fees. About 40% of the practices surveyed said clients were OK with it and 45% said clients responded negatively. Significantly fewer practices said that charging the fee helped reduce no-shows compared with collecting new-client deposits.

After-the-fact no-show charges also have administrative challenges, the biggest one being how to charge the client and collect the fee. Immediately charging a client’s credit card is the easiest way, but many practices don’t keep such information on file. Billing the client creates work for the bookkeeper and can result in ongoing disputes about the validity of the charge. (Figure 4) 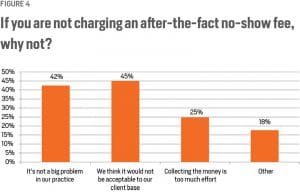 Clients who no-show a certain number of times might find themselves unable to make another appointment. They might be allowed to drop off a pet or wait for an open time, or they are charged a fee that might be applied to the next appointment.

Other Ways to Reduce No-Shows

Most veterinary practices, whether or not they require a deposit or charge a no-show fee, have increased the number and types of appointment reminders and confirmations that a pet owner receives. In general, the practices most successful at reducing no-shows confirm an appointment electronically immediately after it is made and then send a couple more later, including one within a day or so of the scheduled time. A system that requires clients to confirm “yes” or “no” upon receipt of the final reminder might increase the likelihood that they show up.

Some practices require pet owners to complete online paperwork before an appointment is confirmed. Others book only a certain number of new-client appointments each day to mitigate the impact of no-shows. Occasionally, practices double-book appointments but acknowledge that problems occur when both clients show up. Double-booking might work best if it’s done when one client regularly no-shows and is told that he or she might have to wait after arrival. Another strategy is to accept more drop-off appointments to fill the holes created by no-shows.

Finally, understand that clients who have a strong bond with a certain doctor or team member might be less likely to no-show, because the skipped appointment would be seen as rude. Encouraging clients to see the same doctor each time has other benefits, too.

A veterinary practice must take certain steps to succeed with introducing an appointment or no-show fee policy. The first is to put the policy in writing, which forces the team to think through it carefully and address all the nuances. A written policy is easier to share than an unwritten rule and is less likely to be misunderstood.

When it comes to appointment deposits and no-show charges, answer these questions:

Deposit and no-show policies must be clearly communicated to existing and potential clients, ideally in more than one way and in a way that pet owners must acknowledge. Clear communication has several benefits. Not only will a client have a harder time disputing the charge, but it also might discourage clients from no-showing in the first place.

New clients will, of course, be told about the policy when the appointment is made, but it should be included on the practice website and emailed to the pet owner immediately after the appointment is made and the deposit left. The after-the-fact no-show fee should be communicated similarly and the policy sent to each active client or included in digital communications.

Remember to train all team members on the policies — why they were implemented, how they work and how to respond to client questions. Use the most client-friendly words possible (“deposit” rather than “fee”) and be open about your practice’s desire to make the fullest use of appointment slots since so many sick pets need them.

Not every veterinary practice deals with no-shows the same way, but thinking through the issue, determining how much of a problem no-shows actually are and selecting strategies you are comfortable with is important for everyone. Some practices will want to implement fees, but for others, putting up with the no-shows is a cost of doing business.

Dr. Karen E. Felsted is the founder of PantheraT Veterinary Management Consulting. She spent three years as CEO of the National Commission on Veterinary Economic Issues.

The New Dawn of Digitization