One cat owner, guided by her veterinary-aware daughter, responded appropriately when the clinical signs pointed to a likely diagnosis.

Debbie Boone is the owner of 2 Manage Vets Consulting and the 2022 president of VetPartners. She has worked in the veterinary profession for more than 35 years as a practice manager, consultant and speaker. She enjoys improving both workplace culture and the well-being of veterinary professionals. She hosts “The Bend,” a vodcast that invites guests to share stories of resilience over adversity. Learn more at dboone2managevets.com 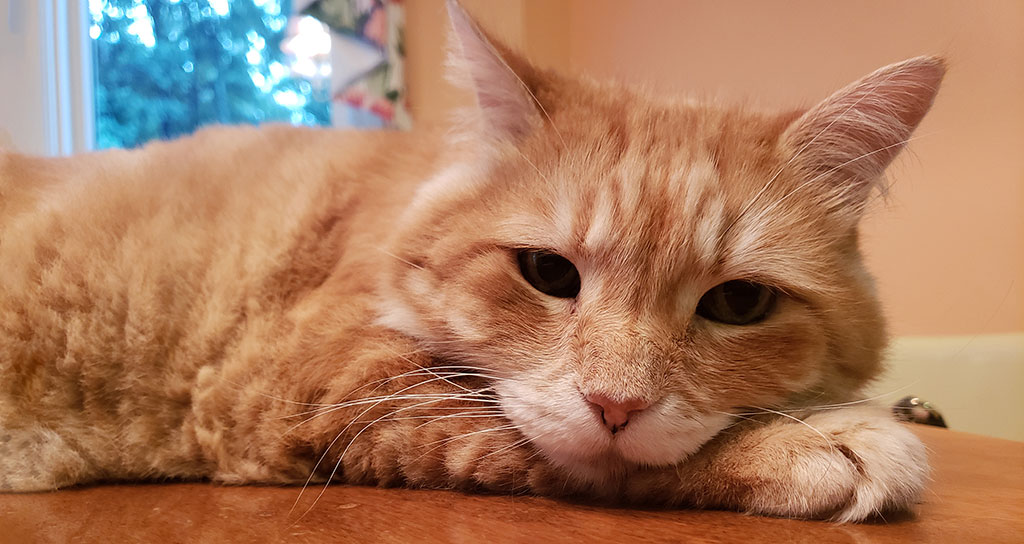 Thirteen-year-old Charlie gets an insulin shot every day at 8 a.m. and 8 p.m.

Anyone who has worked in a veterinary practice expects to receive calls about a friend or family member’s pet health problem. When my mom said, “Deb, I think something is wrong with Charlie,” I wasn’t surprised. Over the years, Charlie had a few issues with which I usually helped. I am not medically trained, but over 35 years, I have worked with and around veterinarians and picked up a thing or two about animals and their illnesses. On this occasion, I started questioning my mom as though I was again a customer service representative speaking with a client.

Charlie is a big, long-haired orange tabby. He is my mom’s constant companion and a highly social cat. You can’t sit down without Charlie deciding that you are the one to scratch his head or, even better, his butt, and he will pat you with his paw or head bump you until you cave. So, when two of his symptoms were lethargy and a disinterest in going onto the patio to watch birds and chase lizards, a red flag went up.

He also was urinating and using the litter box more. “I can’t keep up with the litter; I am using twice as much as usual,” my mom said. “Oh, and he is drinking a lot of water.” Since Charlie is about 13 years old, my first concern was renal failure, so my immediate advice was “Call the vet!” An excellent cat owner, my mom got Charlie an appointment, and he was seen the next day. A battery of tests revealed the diagnosis: diabetes mellitus.

Diabetes mellitus affects an estimated 1 in 300 dogs and 1 in 230 cats. The No. 1 risk factor is obesity — too much food and too many treats. Yes, Charlie is a little chunky.

According to the American Animal Hospital Association’s Diabetes Management Guidelines for Dogs and Cats, “Diabetes mellitus (DM) is a treatable condition that requires a committed effort by veterinarian and client. … Success requires understanding of current scientific evidence and sound clinical judgment. Each patient requires an individualized treatment plan, frequent reassessment and modification of that plan based on the patient’s response.”

In other words, diabetes is complicated, a veterinary team needs to prioritize monitoring, and the pet owner must be willing and able to help.

The first diagnostic steps involve a thorough physical exam. Patients with transient hyperglycemia, or mildly increased blood glucose levels, are different from those with clinical diabetes mellitus. Diabetic cats tend to have wobbly gaits or jump less. (We noted some of this in Charlie.) Diabetes is often caught early when a veterinary practice performs routine bloodwork as part of a preventive care program.

Since the symptoms of diabetes are similar to those involving kidney or thyroid disease or might be caused by medications like corticosteroids, a patient should be diagnosed only based on “persistent glucosuria, persistent hyperglycemia and presence of characteristic clinical signs,” the AAHA guidelines state. Patients also should be assessed for urinary tract infections or pancreatitis, which often accompany diabetes. In addition, the owners might notice a sweet smell on their pets’ breath, indicating ketosis.

After Charlie was diagnosed, the veterinarian and my mom discussed the treatment. His laid-back personality meant Charlie would be easy to medicate. He was prescribed twice-daily insulin injections, and my mom learned how and where to stick him. Charlie gets insulin every morning at 8 and every evening at 8. Consistency and routine in medication, feeding and exercise play a role in the successful care of a diabetic patient. Since my mom is retired, the routine was pretty easy.

Veterinary teams should take clients’ ability to provide home care into serious consideration when coaching them through treatment plans. For example, I was concerned that my mom would have trouble injecting Charlie because of her severely arthritic hands, but she found workarounds and has managed well. Charlie knows to come when she calls, and he jumps on the table and sits while, in her words, she “makes a tent” of the shoulder skin and gives the insulin. He doesn’t move until she says, “OK.” I told you he was a cool cat!

The second step in diabetes management is diet. Cats should be fed a high-protein diet and limited carbohydrates. The carbs contribute to hypoglycemia and glucose toxicity. The excellent news for cats is that with proper nutrition and insulin, remission is possible. As for dogs, they do well with any diet that is complete and balanced and given at consistent times and in consistent amounts. Considering that obesity is a significant factor in the onset of diabetes, maintaining a healthy body condition score helps control the disease.

Just as in humans, monitoring blood glucose levels is imperative for good disease control. So, a few weeks after Charlie’s insulin injections began, he was invited to spend the day with the veterinary team so that blood glucose curves could be run. Ideally, the curves are performed at home, but the option wasn’t good for my mom. Because Charlie doesn’t get stressed at the clinic, his numbers were very accurate. Happily, his dose was correct and his levels acceptable.

The AAHA guidelines include a handy chart for determining the correct monitoring steps. (Learn more at bit.ly/37PYfyF.) Just because patients seem poorly controlled doesn’t necessarily mean they are insulin-resistant. Practitioners first must rule out poor client compliance. Are the injections given in the proper time window? Is the animal getting appropriate meals and limited treats? You might ask clients whether their personal steroid or hormone medications could be transferred to the pet during handling.

A diabetic patient’s health can change rapidly, so partner with pet owners to closely monitor their cat or dog’s behavior, thirst, urination and activity. More frequent exams support the best chances of a positive outcome.

I happily report that Charlie is back to bird watching and lizard chasing and that his diabetes is being managed and monitored well. Hopefully, he will live long and happily and continue to be the center of my mom’s universe.

The American Animal Hospital Association’s 2018 Diabetes Management Guidelines for Dogs and Cats, available at bit.ly/37KTxCo, says this about insulin:

“Veterinarians use a variety of insulin products, but only two are presently approved by the FDA for use in dogs and cats. One of these is a porcine lente product (porcine insulin zinc suspension, Vetsulin) that is approved for both species. The other FDA-approved insulin, human recombinant protamine zinc insulin or PZI (ProZinc) insulin, is labeled as having an appropriate duration in cats, the only species for which it is approved. It is considered by clinicians as a long-acting insulin.”